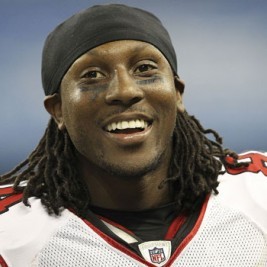 Businesses, Non-profit organizations, event planners and companies across the country have worked closely with our booking agents to hire Roddy White for a speaking engagements, guest appearances, product endorsements and corporate events. Many of those same clients have continued to turn to our speakers bureau as we can easily align Roddy White’s availability with their upcoming seminar, gala, annual conference, corporate function, and grand opening. Our close relationship with Roddy White’s booking agent and management team further enables us to provide inquiring clients with Roddy White’s speaking fee and appearance cost.

If your goal is to hire Roddy White to be your next keynote speaker or to be the next brand ambassador our celebrity speakers bureau can assist. If Roddy White’s booking fee is outside your companies budget or your unable to align with his appearance availability, our booking agents can provide you a list of talent that aligns with your event theme, budget and event date.

Sharod Lamor "Roddy" White is an American football wide receiver for the Atlanta Falcons of the National Football League. He played college football at UAB, and was drafted by the Falcons in the first round of the 2005 NFL Draft.

White saw instant action in his rookie campaign. He ranked fourth among all rookie receivers in 2005. Although a high ankle sprain caused him to remain on the sidelines for much of the preseason, he recovered by Week 2 and was put on the team's roster. In Week 4 against the Minnesota Vikings, he was inserted in the lineup as the No. 3 receiver. During the course of the game he racked up 64 yards on 5 catches. However, during the rest of the season, his performance was generally spotty. He made a fantastic leaping catch over three defenders on a trick play against the New Orleans Saints during Week 14 for a 54-yard touchdown, but dropped a crucial touchdown catch the next week against the Tampa Bay Buccaneers. In spite of this, he still had 108 yards receiving in that game, the second-highest receiving total put up by a rookie wide receiver in 2005, only surpassed by Jaguars receiver Matt Jones.

In the Falcons' 2007 game against the New Orleans Saints, White showed his support for fellow Falcon Michael Vick by wearing a t-shirt that said "Free Mike Vick" and pulling up his jersey after scoring a touchdown. Earlier that day, Vick was sentenced to 23 months in jail on dogfighting charges. White was fined $10,000 by the league for his actions. White became the first Falcon WR since 1999 to reach 1,000 single-season receiving yards on December 23, 2007. He also finished tied for 8th among all NFL wide receivers in receiving yards in 2007 with 1,202 yards. He had 6 receiving touchdowns. White's 2008 performance was even better than the previous year, finishing 4th in the NFL in receiving yards. He finished the year with 1,382 receiving yards, 88 receptions, and 7 touchdowns. He broke Alfred Jenkins team record of 1,358 receiving yards, which stood since 1981. On December 16, 2008, White was named to the 2009 Pro Bowl along with fellow Falcons RB Michael Turner. Roddy White had 1 catch for 26 yards and 1 rush for 7 yards in the 2009 Pro Bowl.

On July 31, 2009, White began a holdout, boycotting the 2009 training camp in an attempt at an early contract extension. On August 8 he signed a six-year, $48 million contract extension with $18.6 million guaranteed and $28 million over the first three years of the deal. The extension makes him the 5th highest paid wide receiver in the league, behind Arizona's Larry Fitzgerald, Carolina's Steve Smith, Chicago's Brandon Marshall, and Houston's Andre Johnson. On October 11, 2009, White set the Falcons franchise record for single-game receiving yards in a game against the San Francisco 49ers. He had 8 receptions for a career-high 210 yards as well as 2 touchdowns, one of which was for 90 yards. White finished the 2009 season with 85 receptions, 1,153 yards, and a career high 11 touchdowns. He became only the second Falcon player to record three straight 1,000 yard seasons.

On January 26, 2010, White was selected to his 2nd consecutive Pro Bowl. White led all receivers in the 2010 Pro Bowl in catches with 8 for 84 yards. In the first game of the 2010 season, White had a career-high 13 receptions. In 2010 Roddy White led the NFL in receptions with 115 and the NFC in receiving yards with 1,389. He also had 10 touchdowns for the year. He led the NFC Pro Bowl team with 69 yards. Roddy White has more yards than any other receiver in the league since 2007. On January 11, 2012 White was added to the NFC Pro Bowl Roster replacing Lions WR Calvin Johnson due to a sore Achilles tendon. In 2011 Roddy White broke the Falcons all time receiving yards record. During the 2013 season, White was dealing with an ankle injury and a hamstring injury, which caused him to get off to a very slow start. In week 7 of the 2013 season, White missed the first game in his 9 year NFL career ending his streak of playing in 133 straight games. On Thursday July 24th, 2014, Roddy White signed a contract extension worth $30 Million over 4 years. On November 16, 2014, Roddy joined the 10,000 yard receiving club against the Panthers with 75 reception yards for a total of 10,002 yards.