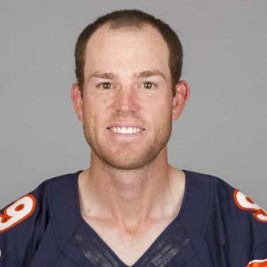 Businesses, Non-profit organizations, event planners and companies across the country have worked closely with our booking agents to hire Robbie Gould for a speaking engagements, guest appearances, product endorsements and corporate events. Many of those same clients have continued to turn to our speakers bureau as we can easily align Robbie Gould’s availability with their upcoming seminar, gala, annual conference, corporate function, and grand opening. Our close relationship with Robbie Gould’s booking agent and management team further enables us to provide inquiring clients with Robbie Gould’s speaking fee and appearance cost.

If your goal is to hire Robbie Gould to be your next keynote speaker or to be the next brand ambassador our celebrity speakers bureau can assist. If Robbie Gould’s booking fee is outside your companies budget or your unable to align with his appearance availability, our booking agents can provide you a list of talent that aligns with your event theme, budget and event date.

Robert Paul "Robbie" Gould III is an American football placekicker for the Chicago Bears of the National Football League. He was originally signed by the New England Patriots as an undrafted free agent in 2005. He played college football for Penn State University. He is currently the third most accurate kicker in NFL history. Gould's seven seasons with at least 100 points is a Bears record.

After going undrafted in the 2005 NFL Draft, the defending Super Bowl champion New England Patriots signed Gould prior to the 2005 NFL preseason even though they already had established Super Bowl winning kicker Adam Vinatieri. Following his not unexpected preseason release from the Pats, Gould signed with the Baltimore Ravens only to be waived three weeks later. He then took a sabbatical from football, working construction for M&R Contracting in Mill Hall, Pennsylvania.

The Bears signed him on October 8, 2005, following the Week 3 injury of their starting kicker, Doug Brien. Gould kicked his first NFL field goal the next week in a 20–10 loss at Cleveland, and his first game-winner in Week 9 against the New Orleans Saints, finishing the 2005 season with a 77% field goal percentage and hitting all but one of his 20 PAT attempts. Gould preparing to kick in 2009 against the San Francisco 49ers He kicked 26 consecutive field goals during the 2006 NFL season, breaking former Bears’ kicker Kevin Butler’s record of most consecutive field goals and winning NFL Special Teams Player of the Month for October 2006 in the process. In addition, NFL fans across the nation voted Gould the NFC’s kicker for the 2007 Pro Bowl.

He was also named to the 2006 All-Pro team by the Associated Press. His 25-yard overtime field goal against the Tampa Bay Buccaneers gave the Bears home field advantage throughout the ensuing playoffs. On January 14, 2007, his 49-yard field goal in overtime against the Seattle Seahawks gave the Bears their first divisional playoff win since 1988, advancing them to the NFC Championship game, which they won but then lost Super Bowl XLI to Peyton Manning and the Indianapolis Colts. 29–17. The following season, Gould was named NFC special teams player of the month for December 2008 after making all eight of his field goal attempts including two more overtime game-winners, becoming the fourth kicker of overtime game-winning field goals in back-to-back games in NFL history. He converted 26 of 29 field goal attempts in 2008, breaking his own franchise single-season record for accuracy. Going into the 2009 season, he had converted 84.8 of his career field goal attempts. He has missed three extra point attempts in his NFL career.

On May 12, 2008, he signed an extension with the Bears that would keep him on the team through the 2013 season. The contract, reportedly worth $15.5 million, included a $4.25 million signing bonus and made Gould the NFL's highest-paid kicker. On December 11, 2011, he kicked a then career-long, and then-Chicago Bears franchise record, 57-yard field goal against the Denver Broncos. He kicked another 57-yarder in the second game of the 2012 preseason against the Washington Redskins, giving Chicago a 33-31 win, which of course didn't count officially since it came in an exhibition game. Gould made his tenth career game-winning field goal against the Panthers in Week 8 of 2012, and his ten consecutive field goals from 50 yards or more without a miss was second behind Tony Zendejas. Before pregame warmups in Week 14 of 2012 against the Minnesota Vikings, Gould strained his left calf. After limited play during the game, Gould was placed on injured reserve for the remainder of the 2012 season. In Week 1 of 2013 against the Cincinnati Bengals, Gould made a 58-yarder late in the first half, setting the Bears record for longest field goal and tying him with Zendejas for most consecutive 50+-yard field goals without a miss with eleven. In Week 13 against the Vikings, Gould missed a career-high two field goals, tying his two missed kicks in 2006 against the St. Louis Rams; the two field goals were a 66-yarder, which would have broken the NFL record for longest field goal converted, and a 47-yarder in overtime. On December 27, Gould signed a four-year extension with the Bears worth $15 million, with $9 million guaranteed, the most by a kicker. Gould ended the 2013 season converting 26 of 29 field goal attempts and 45 of 46 extra points for a total of 123 points scored. Gould also became the second player in Bears history to record 1,000 points, with 1,025, 91 points behind Kevin Butler. In 2014, he converted 9 of 12 field goal attempts and 28 of 29 PAT attempts for 55 points, bringing his career total to 1080 points; he is currently 36 points shy of Kevin Butler's record.