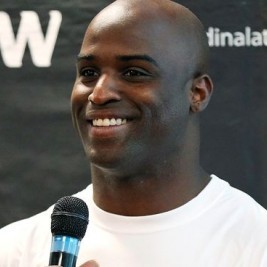 Businesses, Non-profit organizations, event planners and companies across the country have worked closely with our booking agents to hire Ricky Williams for a speaking engagements, guest appearances, product endorsements and corporate events. Many of those same clients have continued to turn to our speakers bureau as we can easily align Ricky Williams’s availability with their upcoming seminar, gala, annual conference, corporate function, and grand opening. Our close relationship with Ricky Williams’s booking agent and management team further enables us to provide inquiring clients with Ricky Williams’s speaking fee and appearance cost.

If your goal is to hire Ricky Williams to be your next keynote speaker or to be the next brand ambassador our celebrity speakers bureau can assist. If Ricky Williams’s booking fee is outside your companies budget or your unable to align with his appearance availability, our booking agents can provide you a list of talent that aligns with your event theme, budget and event date.

One of the greatest running back in college football history, Ricky Williams was born May 21, 1977 in San Diego, California. He was drafted by the New Orleans Saints fifth overall in the 1999 NFL Draft. He played and set numerous college football records at the University of Texas.

Rapper Master P's organization, No Limit Sports negotiated his contract, which was largely incentive-laden in exchange for an $8M-plus signing bonus with salary incentives worth a range of $11 million to $68 million should he hit all of his incentives, with most of them requiring higher than top-level production to attain. Williams later made Leigh Steinberg his agent. Ditka was later fired for the team's poor performance, and Williams was traded after 3 seasons to the Miami Dolphins on March 8, 2002 for two first-round picks. In his first season with the Dolphins, he was the NFL's leading rusher and a Pro Bowler with 1,853 yards.

On January 3, 2008, Ricky Williams had his contract "renewed" by the Miami Dolphins. The agent for Williams said his client is healing nicely and should be healthy well before training camp. Williams is expected to be the back up for Ronnie Brown.

In 2009, during the Dolphins ninth game, starting running back Ronnie Brown suffered a season-ending injury, and Williams, at age 32, became the starter for the remainder of the year. He finished the season with 1,121 yards rushing and a 4.7 yards per carry; along the way setting an NFL record of the longest time span between 1,000 yard season. Williams also became only the 7th player in NFL history to begin a season age 32 or older, and reach 1,000 yards rushing that same season.

In the 2010 season Williams carried 159 times for 673 yards and 2 touchdowns for the Dolphins while splitting duties averaging 4.2 yards a carry at the age of 33.

Williams signed a two-year, $2.5 million contract with the Baltimore Ravens on August 8, 2011. Williams scored his first touchdown of the season against the Houston Texans on October 16. On January 1, 2012, Williams surpassed the 10,000 career rushing yards mark and became the 26th player in the history of the NFL to do so. On February 7, 2012, Williams informed the Ravens of his retirement from the NFL