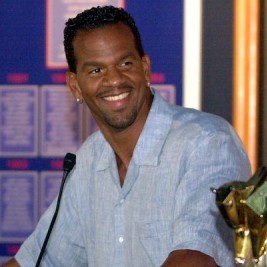 Businesses, Non-profit organizations, event planners and companies across the country have worked closely with our booking agents to hire Andre Reed for a speaking engagements, guest appearances, product endorsements and corporate events. Many of those same clients have continued to turn to our speakers bureau as we can easily align Andre Reed’s availability with their upcoming seminar, gala, annual conference, corporate function, and grand opening. Our close relationship with Andre Reed’s booking agent and management team further enables us to provide inquiring clients with Andre Reed’s speaking fee and appearance cost.

If your goal is to hire Andre Reed to be your next keynote speaker or to be the next brand ambassador our celebrity speakers bureau can assist. If Andre Reed’s booking fee is outside your companies budget or your unable to align with his appearance availability, our booking agents can provide you a list of talent that aligns with your event theme, budget and event date.

Andre Reed is widely considered one of the best wide receivers to ever play the game. During his NFL career, Reed was known as a highly durable and tough receiver.

Reed attended college at Kutztown University of Pennsylvania, where he was a standout wide receiver who quickly drew the attention of the NFL. Reed was drafted by the Buffalo Bills in the 1985 NFL Draft.

During the Bills' January 3, 1993 game against the Oilers, Houston led decisively 35-3 during the third quarter. Reed caught three touchdowns in the second half to lead the Bills to the largest comeback in NFL history. Contributing substantially to "The Comeback," Reed finished the game with 8 receptions for 136 yards and 3 touchdowns. The game is considered one of the most extraordinary comebacks in all of American sports.

Reed went on to catch 8 passes for 152 yards in the Bills 55-17 Super Bowl XXVII loss to the Dallas Cowboys a few weeks later.

Reed played most of his career with former Bills quarterback Jim Kelly, who was inducted into the Hall in 2002.