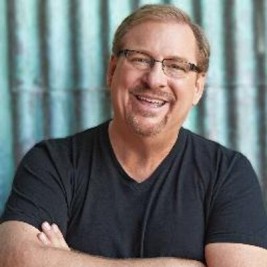 Businesses, Non-profit organizations, event planners and companies across the country have worked closely with our booking agents to hire Rick Warren for a speaking engagements, guest appearances, product endorsements and corporate events. Many of those same clients have continued to turn to our speakers bureau as we can easily align Rick Warren’s availability with their upcoming seminar, gala, annual conference, corporate function, and grand opening. Our close relationship with Rick Warren’s booking agent and management team further enables us to provide inquiring clients with Rick Warren’s speaking fee and appearance cost.

If your goal is to hire Rick Warren to be your next keynote speaker or to be the next brand ambassador our celebrity speakers bureau can assist. If Rick Warren’s booking fee is outside your companies budget or your unable to align with his appearance availability, our booking agents can provide you a list of talent that aligns with your event theme, budget and event date.

Pastor Rick Warren is one of the world's most influential Christians. His Saddleback Church, founded in 1980, boasts a congregation of 22,000, and his Purpose-Driven Life is one of the best-selling books of all time. Warren's mission is to attack what he calls the five "Global Goliaths" -- spiritual emptiness, egocentric leadership, extreme poverty, pandemic disease, and illiteracy and poor education. He teaches that doing good is the only way humans create significance in our lives. He and his wife famously became "reverse tithers," donating 90 percent of their considerable fortune to philanthropic causes. Warren is particularly passionate about fighting AIDS, and in 2006, his church hosted the second annual Global Summit on AIDS and the Church, attended by US Senator Barack Obama, among others.

In recent years, Warren has become a prominent steward of social justice, speaking out on poverty relief and encouraging spiritual leaders to play a role in guiding the planet toward sustainability. Given his global focus and considerable platform, Warren has become a sought-after advisor to world leaders, speaking at the United Nations, the World Economic Forum and the Council on Foreign Relations. His involvement in the 2008 Presidential election sparked controversy and praise from both sides; during the campaign trail, he hosted candidates John McCain and Barack Obama at Saddleback Church for a forum on moral issues. It was the first time McCain and Obama appeared together publicly as presidential candidates. When Barack Obama was later elected to office, he asked Warren to give the invocation at his inauguration. "Rick Warren is arguably the most influential evangelical pastor in America. " The Economist