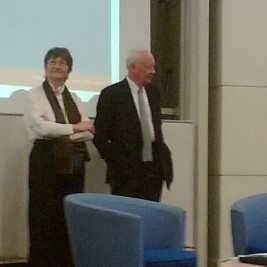 If your goal is to hire Dr. Charles Handy to be your next keynote speaker or to be the next brand ambassador our celebrity speakers bureau can assist. If Dr. Charles Handy’s booking fee is outside your companies budget or your unable to align with his appearance availability, our booking agents can provide you a list of talent that aligns with your event theme, budget and event date.

Charles Handy was born in Kildare, Ireland, in 1932, the son of an Archdeacon, and was educated in England and the United States. He graduated from Oriel College, Oxford, with first-class honours in "Greats", an intellectual study of classics, history and philosophy.

After college, Charles Handy worked for Shell International as a marketing executive, economist and management educator, in South-East Asia and London before entering the Sloan School of Management at the Massachusetts Institute of Technology. In 1967 he returned to England to design and manage the only Sloan Programme outside the United States, at Britain's first Graduate Business School, in London.

In 1972 Handy became a full Professor at the School, specializing in managerial psychology. From 1977 to 1981, Handy served as Warden of St.George's House in Windsor Castle, a private conference and study centre concerned with ethics and values in society. He was Chairman of the Royal Society of Arts in London from 1987 to 1989. He holds honorary Doctorates or Fellowships from twelve British Universities and was appointed CBE in 2000. He is known to many in Britain for his 'Thoughts for Today' on the BBC's Radio Today programme and, in a 2001 survey commissioned by FTdynamo.com, was voted the world's second most influential management guru, after Peter Drucker.

Handy's main concern is the implication for society, and for individuals, of the dramatic changes which technology, demography and economics are bringing to the workplace and to all our lives. His books on these themes, which he started writing in 1975, have sold well over a million copies around the world in all the principal languages.

He has published numerous books and articles. Among those published in the States are his latest The Elephant and Flea a personal reflection on our changing society and ways of working. The Age of Paradox is a sequel to his earlier best-selling The Age of Unreason, which first explored these changes, and was named by both Fortune and Business Week as one of the ten best business books of the year. The Hungry Spirit was published by Broadway and Waiting for the Mountain to Move by Jossey Bass. His article for the Harvard Business Review, Balancing Corporate Power: A New Federalist Paper, won the McKinsey Award for 1992, and his next article for the Review, Trust and the Virtual Organization, won the second McKinsey Award in 1995. His latest article for HBR was published in December 2002 called What's a Business For?

In 1999 he and his wife, Elizabeth, a portrait photographer, combined to produce The New Alchemists - a photographic and literary portrait of Londoners who have 'created something out of nothing'. Their next joint book was published in November 2002 called Reinvented Lives - Women at 60.

Handy and his wife Elizabeth, his business partner as well as a portrait photographer, have two grown children and live in London and Norfolk in England. They have what Handy has termed a 'portfolio life', balancing their skills and their time to make the most of their independent careers.