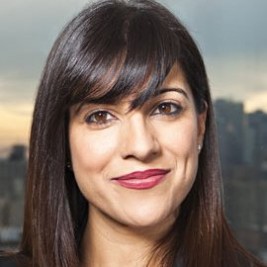 Businesses, Non-profit organizations, event planners and companies across the country have worked closely with our booking agents to hire Reshma Saujani for a speaking engagements, guest appearances, product endorsements and corporate events. Many of those same clients have continued to turn to our speakers bureau as we can easily align Reshma Saujani’s availability with their upcoming seminar, gala, annual conference, corporate function, and grand opening. Our close relationship with Reshma Saujani’s booking agent and management team further enables us to provide inquiring clients with Reshma Saujani’s speaking fee and appearance cost.

If your goal is to hire Reshma Saujani to be your next keynote speaker or to be the next brand ambassador our celebrity speakers bureau can assist. If Reshma Saujani’s booking fee is outside your companies budget or your unable to align with his appearance availability, our booking agents can provide you a list of talent that aligns with your event theme, budget and event date.

Reshma is the Indian-American daughter of immigrants who were forced to flee their home in Uganda under threat of violence from the dictator Idi Amin. She grew up with the opportunity to attend great public schools and graduated from the University of Illinois, speaking at her graduation and earning the highest academic honors. After interning at the White House Office of Public Liaison under President Clinton, Reshma went on to earn a Masters in Public Policy from Harvard's Kennedy School of Government and graduate from Yale Law School, where she worked as a research assistant under the great Civil Rights Judge, A. Leon Higginbotham, Jr.

Moving to New York City with more than $200,000 in student loan debt, Reshma got a job at Davis Polk & Wardwell where she worked as a litigator and handled pro-bono asylum cases representing some of the city's most vulnerable defendants. As a lawyer in the financial services sector, Reshma sent money home to her parents every month to help them pay their mortgage, and became increasingly active in Democratic politics, supporting female candidates and engaging communities in the political process who had for too long been excluded.

Reshma founded South Asians for Kerry (SAKI) to activate the South Asian community in an unprecedented way, and served as co-chair of the DNC's Trailblazers program, the under-40 fundraising effort to elect Democratic candidates across the country. In 2008, Reshma served on the National Finance Board for Hillary Clinton's presidential campaign, and had the honor of serving as Vice-Chair of the New York delegation at the DNC.

In 2009, Reshma became the first South Asian woman in the country to run for United States Congress, devoting herself full time to a career in public service and campaigning across New York's 14th District to bring new ideas and new leadership to Washington. After the election, Reshma was appointed Deputy Public Advocate of New York City, where she served as Executive Director of the Fund for Public Advocacy. In this role, Reshma created the DREAM Fellowship to enable hardworking undocumented immigrant students to go to CUNY and achieve the American Dream.

Most recently, Reshma launched the innovative non-profit organization Girls Who Code, which is teaching teenage girls from all five boroughs of New York City the skills to get high-paying jobs in technology. Reshma brought together leaders from the tech industry including Twitter, Google, eBay, and General Electric with computer science experts and teachers to build a pipeline of engineering talent in New York City. She is the author of a new book on female leadership called "Women Who Dont Wait in Line," released in 2013.

Reshma lives in Chelsea with her husband, Nihal Mehta, a tech entrepreneur, and their dog, Stanley.