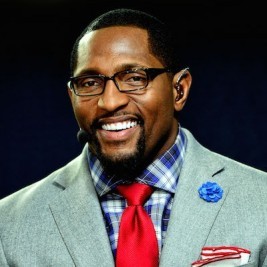 Businesses, Non-profit organizations, event planners and companies across the country have worked closely with our booking agents to hire Ray Lewis for a speaking engagements, guest appearances, product endorsements and corporate events. Many of those same clients have continued to turn to our speakers bureau as we can easily align Ray Lewis’s availability with their upcoming seminar, gala, annual conference, corporate function, and grand opening. Our close relationship with Ray Lewis’s booking agent and management team further enables us to provide inquiring clients with Ray Lewis’s speaking fee and appearance cost.

If your goal is to hire Ray Lewis to be your next keynote speaker or to be the next brand ambassador our celebrity speakers bureau can assist. If Ray Lewis’s booking fee is outside your companies budget or your unable to align with his appearance availability, our booking agents can provide you a list of talent that aligns with your event theme, budget and event date.

Raymond Anthony Lewis, Jr. is a former American football linebacker who played his entire 17-year career for the Baltimore Ravens of the National Football League. He played college football for the University of Miami, and earned All-American honors. Drafted by the Ravens in 1996, Lewis was the last player remaining from the inaugural team at the start of the 2012–13 season.

Playing middle linebacker his entire career, Lewis is considered one of the greatest ever to play the position. Lewis was selected to 13 Pro Bowls and named an Associated Press All-Pro 10 times. He is also thought to be the greatest Baltimore Ravens player of all time. He won the NFL Defensive Player of the Year in 2000 and 2003, becoming the sixth player to win the award multiple times. Lewis was also the second linebacker to win the Super Bowl Most Valuable Player Award and the first to win the award on the winning Super Bowl team. Lewis pled guilty to obstruction of justice in connection with the stabbing deaths of two men in 2000.

After a triceps tear that sidelined him for most of the 2012–13 season, Lewis returned for the Ravens playoff run and a victory in Super Bowl XLVII.

On March 13, 2013, it was announced that Lewis would join ESPN as a contributor for their NFL coverage.