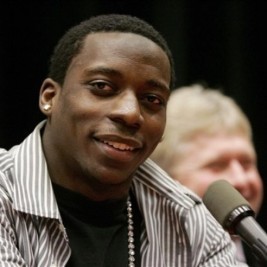 If your goal is to hire Rashard Mendenhall to be your next keynote speaker or to be the next brand ambassador our celebrity speakers bureau can assist. If Rashard Mendenhall’s booking fee is outside your companies budget or your unable to align with his appearance availability, our booking agents can provide you a list of talent that aligns with your event theme, budget and event date.

Rashard Mendenhall is a retired American football running back who played in the National Football League (NFL). He was drafted by the Pittsburgh Steelers in the first round of the 2008 NFL Draft. He played college football at Illinois. Mendenhall also spent one season with the Arizona Cardinals.

Mendenhall was drafted 23rd overall by the Pittsburgh Steelers in the 2008 NFL Draft. Prior to his rookie season Mendenhall was ranked by ESPN as the 30th best running back in the league. On July 25, 2008, Mendenhall agreed to a five-year contract worth US$12.55 million with the Steelers, of which $7.125 million is guaranteed. He was expected to be a compliment to Pro-Bowl running back Willie Parker, in addition to returning kicks. Mendenhall fumbled twice in Pittsburgh's third pre-season game against Minnesota; they were attributed to adjusting to the faster pace of the NFL. Days after the game, teammate Hines Ward placed a ball in Mendenhall's locker with a note stating, "Take Mendenhall's ball away and get $100 from him." Mendenhall was required to carry the ball everywhere he went until the team's next game. Mendenhall fumbled once more in the Steelers final pre-season game, but worked with running backs coach Kirby Wilson to fix the problem.

Mendenhall enjoys reading and writing poetry in his spare time. On May 5, 2008, while walking in Chicago, Mendenhall was robbed at gunpoint. He was not injured. In September 2008, Mendenhall became the first professional athlete to sign an endorsement deal with Champion in ten years.