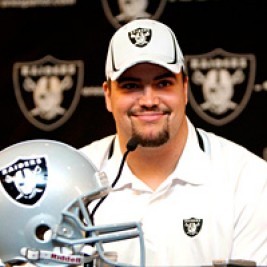 If your goal is to hire Stefen Wisniewski to be your next keynote speaker or to be the next brand ambassador our celebrity speakers bureau can assist. If Stefen Wisniewski’s booking fee is outside your companies budget or your unable to align with his appearance availability, our booking agents can provide you a list of talent that aligns with your event theme, budget and event date.

Stefen Wisniewski is an American football center for the Jacksonville Jaguars of the National Football League. He was drafted by the Oakland Raiders in the second round of the 2011 NFL Draft out of Penn State.

Wisniewski was taken with the 48th overall pick in the second round of the 2011 NFL Draft by the Oakland Raiders, and signed with the Raiders shortly before the beginning of the 2011 training camp. Stating that he wished to create his own legacy, he declined to wear his uncle's old uniform #76 (which was available), opting for his college #61 instead.

At the beginning of the 2011 season, coach Hue Jackson named Wisniewski the Raiders' starting left guard, the same position occupied by Steve Wisniewski, placed between Samson Satele at center and Jared Veldheer at left tackle. On opening day of the 2011 NFL season, the offensive line cleared the way for 190 rushing yards and a victory over the Denver Broncos.

Wisniewski was named the Pepsi NFL Rookie of the Week for Week 3 of the 2011 NFL season, after the Oakland offensive line cleared the way for 234 rushing yards and allowing only one sack against the New York Jets. His lead block on a pivotal fourth-quarter touchdown run gave Oakland a two-score lead. On January 2012, Wisniewski was named to the Pro Football Weekly All-Rookie team for his outstanding rookie season as starting left guard. Wisniewski helped pave the way for the NFL's 7th ranked rushing attack and anchored an offensive line that only allowed 25 sacks, tied for 3rd best in the NFL. With the departure of Samson Satele to the Indianapolis Colts in the 2012 offseason, Wisniewski became the Raiders' starting center.