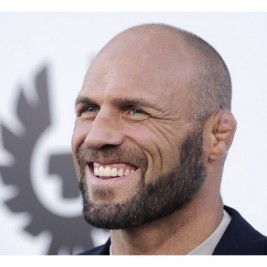 Businesses, Non-profit organizations, event planners and companies across the country have worked closely with our booking agents to hire Randy Couture for a speaking engagements, guest appearances, product endorsements and corporate events. Many of those same clients have continued to turn to our speakers bureau as we can easily align Randy Couture’s availability with their upcoming seminar, gala, annual conference, corporate function, and grand opening. Our close relationship with Randy Couture’s booking agent and management team further enables us to provide inquiring clients with Randy Couture’s speaking fee and appearance cost.

If your goal is to hire Randy Couture to be your next keynote speaker or to be the next brand ambassador our celebrity speakers bureau can assist. If Randy Couture’s booking fee is outside your companies budget or your unable to align with his appearance availability, our booking agents can provide you a list of talent that aligns with your event theme, budget and event date.

Couture has competed in a record 15 title fights. He holds the most title reigns in the UFC with five. His last fight with Lyoto Machida marked his 24th fight in the UFC, the third largest number of fights in the UFC (Tito Ortiz is first with 27, Matt Hughes and Josh Koscheck are tied at second with 25). Couture is the fourth member of the UFC Hall of Fame. He is the only person over the age of 40 to have won a UFC championship fight, having done so four times. Couture has also been one of the few MMA champions to have recovered a title he had previously lost, and is the only fighter to have achieved it three times (twice at Heavyweight, once at Light Heavyweight).

Couture was an Olympic wrestling alternate and has lived in Corvallis, Oregon, throughout much of his career, where he served as an assistant wrestling coach and a strength and conditioning coach for Oregon State University. He established Team Quest with Matt Lindland and Dan Henderson, a training camp for fighters, based out of Gresham, Oregon, and headed by coach Robert Folis. In 2005, Couture moved to Las Vegas, where he opened his own extensive chain of gyms under the name Xtreme Couture. Couture partnered with Bas Rutten to open Legends Gym in Hollywood, California.