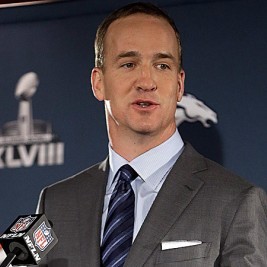 Businesses, Non-profit organizations, event planners and companies across the country have worked closely with our booking agents to hire Peyton Manning for a speaking engagements, guest appearances, product endorsements and corporate events. Many of those same clients have continued to turn to our speakers bureau as we can easily align Peyton Manning’s availability with their upcoming seminar, gala, annual conference, corporate function, and grand opening. Our close relationship with Peyton Manning’s booking agent and management team further enables us to provide inquiring clients with Peyton Manning’s speaking fee and appearance cost.

If your goal is to hire Peyton Manning to be your next keynote speaker or to be the next brand ambassador our celebrity speakers bureau can assist. If Peyton Manning’s booking fee is outside your companies budget or your unable to align with his appearance availability, our booking agents can provide you a list of talent that aligns with your event theme, budget and event date.

Peyton Manning was born March 24, 1976 and is a quarterback for the Denver Broncos of the National Football League. He played for the Indianapolis Colts for 14 seasons from 1998–2011. He is the son of former NFL quarterback Archie Manning and an elder brother of New York Giants quarterback Eli Manning. One of the most popular spokepersons in the game, Peyton has numerous endorsements such as Reebok, Buick, Wheaties, DirecTV, Gatorade and Papa Johns. He is also a popular motivational speaker and philanthropist. Manning played college football at the University of Tennessee, leading the Volunteers to the 1997 SEC Championship in his senior season. He was chosen by the Indianapolis Colts with the first overall pick in the 1998 NFL Draft. From 1998 to 2010, he led the Colts to eight (seven AFC South and one AFC East) division championships, two AFC championships, and to a Super Bowl championship (Super Bowl XLI). He has won a record four league most valuable player awards, was the most valuable player of Super Bowl XLI, has been named to eleven Pro Bowls, has eleven 4,000-yard passing seasons (including a record six straight), and is the Indianapolis Colts' all-time leader in passing yards (54,828) and touchdown passes (399). In 2009, he was named the best player in the NFL and Fox Sports along with Sports Illustrated named him the NFL player of the decade of the 2000s. In May 2011, he underwent neck surgery to alleviate neck pain and arm weakness he dealt with during the previous few seasons before signing a five-year, $90 million contract extension with the Colts in July 2011. Manning had hoped to play in the 2011 season, but in September 2011, he underwent a much more serious second surgery: a level one cervical fusion procedure. Manning had never missed an NFL game in his career, but was forced to miss the entire 2011 season. He was released by the Colts on March 7, 2012, and after an almost two-week period where he visited with and worked out for several NFL teams, he signed with the Denver Broncos on March 20, 2012.

Shortly after beginning his NFL career, Manning started his own charity, the Peyback Foundation. The Peyback Foundation's mission is to help disadvantaged kids, and focuses its efforts in Louisiana, Tennessee, and Indiana. For his work with this foundation, Manning received the Samuel S. Beard Award for Greatest Public Service by an Individual 35 Years or Under, an award given out annually by Jefferson Awards. Manning, along with his brother Eli, volunteered their assistance in the wake of Hurricane Katrina. Among the tasks performed, the Mannings assisted in the delivery of 30,000 pounds of water, Gatorade, baby formula, diapers, and pillows to the people of New Orleans. On September, 2007, St. Vincent Hospital in Indianapolis renamed its children's hospital to "Peyton Manning Children's Hospital at St. Vincent." Manning and his wife made a donation of an undisclosed amount to St. Vincent's and have had a relationship with the hospital since his arrival in Indianapolis.