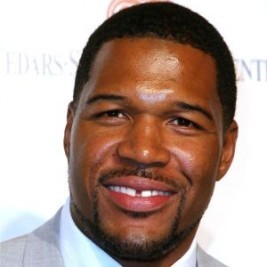 If your goal is to hire Michael Strahan to be your next keynote speaker or to be the next brand ambassador our celebrity speakers bureau can assist. If Michael Strahan’s booking fee is outside your companies budget or your unable to align with his appearance availability, our booking agents can provide you a list of talent that aligns with your event theme, budget and event date.

Michael Strahan is a retired American football defensive end who spent his entire 15-year career with the New York Giants of the National Football League (NFL). Strahan set a record for the most sacks in a season in 2001, and won a Super Bowl in his final season in 2007. After retiring from the NFL, Strahan became a media personality. He is currently a football analyst on Fox NFL Sunday, and also serves as co-host on the syndicated morning talk show Live! with Kelly and Michael (with fellow co-host Kelly Ripa). Additionally, he is currently a regular contributor on the ABC morning television show Good Morning America. He starred in and produced the short-lived Fox sitcom Brothers and appeared as host for Pros vs. Joes alongside fellow Fox football analyst Jay Glazer. On February 1, 2014, he was elected to the Pro Football Hall of Fame.