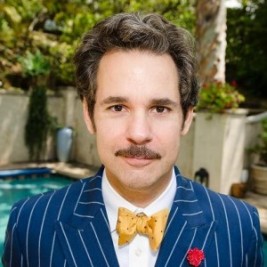 If your goal is to hire Paul F. Tompkins to be your next keynote speaker or to be the next brand ambassador our celebrity speakers bureau can assist. If Paul F. Tompkins’s booking fee is outside your companies budget or your unable to align with his appearance availability, our booking agents can provide you a list of talent that aligns with your event theme, budget and event date.

He is also the host of The Pod F. Tompkast, which was ranked #1 by Rolling Stone on their list of "The 10 Best Comedy Podcasts of the Moment" in 2011.

In 2010 Tompkins launched his podcast called The Pod F. Tompkast. The podcast is a mixture of Tompkins discussing various topics, clips from his live show at Largo, and segments where Tompkins voices a variety of celebrities speaking with one another. Comedian Jen Kirkman is a regular contributor on the show.

The Thrilling Adventure Hour comedy show at Largo began podcasting in January 2011; in October of that same year the show's podcasts moved to the Nerdist Industries podcast network created by Chris Hardwick.

Dead Authors, a live show that Tompkins hosts at the UCB Theatre in Los Angeles, also began podcasting in September 2011.

In May 2012 Tompkins started a weekly web series called Speakeasy. Hosted by the Break Media site MadeMan.com, the series features Tompkins interviewing various male guests in the entertainment industry, such as Ty Burrell, Nathan Fillion, Zach Galifianakis, Chris Hardwick, Oscar Nunez and Weird Al Yankovic. The interviews are conducted as casual conversations between Tompkins and his guest over cocktails at various bars in the L.A. area.

Tompkins has appeared several times as a guest, and one time as a guest host, on Comedy Bang Bang (formerly Comedy Death-Ray Radio), a weekly audio podcast hosted by Scott Aukerman, a comedian who also wrote for Mr. Show with Bob and David. The show's format mixes conversation between the host and guests, occasionally including game segments and interspersed with comedy music recordings by artists like Weird Al Yankovic, The Lonely Island and Flight of the Conchords. Some guests play characters or impersonate certain celebrities, sometimes for the entirety of the episode; Paul F. Tompkins has impersonated celebrities such as rapper Ice-T, composer Andrew Lloyd Webber and Buddy Valastro from the reality television series Cake Boss.

In addition to Aukerman's Comedy Bang Bang, Tompkins regularly appears on the podcasts of other fellow comedians such as WTF with Marc Maron, Jimmy Pardo's Never Not Funny, Jessica Chaffin and Jamie Denbo's Ronna and Beverly podcast, and the Superego podcast with Jeremy Carter and Matt Gourley. Tompkins has also been a regular guest on the radio show and podcast The Best Show on WFMU with Tom Scharpling.