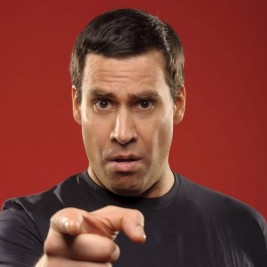 If your goal is to hire Pablo Francisco to be your next keynote speaker or to be the next brand ambassador our celebrity speakers bureau can assist. If Pablo Francisco’s booking fee is outside your companies budget or your unable to align with his appearance availability, our booking agents can provide you a list of talent that aligns with your event theme, budget and event date.

Francisco started his career doing Improv in Tempe, Arizona.  Pablo was relatively unknown until the late 1990s, when he began appearing on Mad TV as a featured player. His stand-up act was finally introduced to America at large when he landed his own half-hour comedy special on Comedy Central in 2000.

In 2001 and 2002, Francisco toured as part of "The Three Amigos" with Carlos Mencia and Freddy Soto. Since then he has performed on The Tonight Show with Jay Leno, VH1's ILL-ustrated, and, most recently, Mind of Mencia as The Voiceover Dude.

Pablo is widely recognized within the comedy business for his uncanny ability to impersonate numerous amounts of people including Aaron Neville, Arnold Schwarzenegger, and, most famously, The Movie Voiceover Guy, Don LaFontaine or Hal Douglas, as well as his ability to create vocal sound effects as part of his act.

Francisco resides in Redondo Beach, and tours frequently in Southern California. His personal favorite venue is The Improv at the Irvine Spectrum Center, which is where his 2004 DVD "Bits and Pieces" was filmed. On December 31, 2005, he hosted a special New Years Eve party at the Irvine Improv.