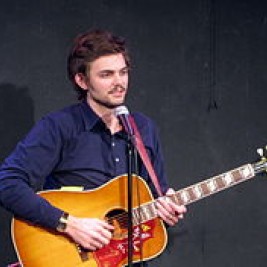 Businesses, Non-profit organizations, event planners and companies across the country have worked closely with our booking agents to hire Nick Thune for a speaking engagements, guest appearances, product endorsements and corporate events. Many of those same clients have continued to turn to our speakers bureau as we can easily align Nick Thune’s availability with their upcoming seminar, gala, annual conference, corporate function, and grand opening. Our close relationship with Nick Thune’s booking agent and management team further enables us to provide inquiring clients with Nick Thune’s speaking fee and appearance cost.

If your goal is to hire Nick Thune to be your next keynote speaker or to be the next brand ambassador our celebrity speakers bureau can assist. If Nick Thune’s booking fee is outside your companies budget or your unable to align with his appearance availability, our booking agents can provide you a list of talent that aligns with your event theme, budget and event date.

Nick Thune was born December 8, 1979 and is an American actor, comedian, and musician.

Thune was born in Seattle, Washington to parents Erik and Cindy Thune. He has one sister and twin brothers. At age 24, Thune moved to Los Angeles to pursue his career in stand up and has been gaining popularity. He has performed on The Tonight Show eight times, and was featured in a Comedy Central Presents special in 2007. Aside from numerous stand up gigs, he has also landed small but memorable roles in movies such as Knocked Up and Unaccompanied Minors.

In February 2009, Thune performed at the DTD Reality concert at the University of Southern California.

Thune was cast as a lead in the 2010 NBC pilot for "Beach Lane" starring opposite Matthew Broderick. However, the pilot was not picked up as a series. He has since made guest appearances on the comedy programs Traffic Light and Happy Endings in 2011, and Don't Trust the B---- in Apartment 23 in 2012.