Search Nick Saban
Head Coach of the University of Alabama 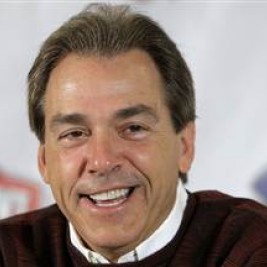 Businesses, Non-profit organizations, event planners and companies across the country have worked closely with our booking agents to hire Nick Saban for a speaking engagements, guest appearances, product endorsements and corporate events. Many of those same clients have continued to turn to our speakers bureau as we can easily align Nick Saban’s availability with their upcoming seminar, gala, annual conference, corporate function, and grand opening. Our close relationship with Nick Saban’s booking agent and management team further enables us to provide inquiring clients with Nick Saban’s speaking fee and appearance cost.

If your goal is to hire Nick Saban to be your next keynote speaker or to be the next brand ambassador our celebrity speakers bureau can assist. If Nick Saban’s booking fee is outside your companies budget or your unable to align with his appearance availability, our booking agents can provide you a list of talent that aligns with your event theme, budget and event date.

Nick Saban was born October 31, 1951 and is an American college football coach, and the current head football coach of the University of Alabama, a position he has held since the 2007 season. Saban previously served as head coach of the National Football League's Miami Dolphins and three other universities: Louisiana State University, Michigan State University, and the University of Toledo. His eight-year contract totaling US$32 million made him one of the highest paid football coaches, professional or collegiate, in the United States at the time. He appeared on the September 1, 2008, cover of Forbes magazine as "The Most Powerful Coach in Sports".  Saban's career record as a college head coach is 177–59–1.

Saban led the LSU Tigers to the BCS National Championship in 2003 and the Alabama Crimson Tide to BCS and AP national championships in the 2009, 2011 and 2012 seasons, making him the first coach in college football history to win a national championship with two different Football Bowl Subdivision (FBS) schools since the inception of the AP Poll in 1936. Saban and Bear Bryant are the only coaches to win an SEC championship at two different schools. In May 2013, he was inducted into the Alabama Sports Hall of Fame.