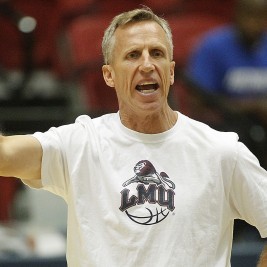 Businesses, Non-profit organizations, event planners and companies across the country have worked closely with our booking agents to hire Mike Dunlap for a speaking engagements, guest appearances, product endorsements and corporate events. Many of those same clients have continued to turn to our speakers bureau as we can easily align Mike Dunlap’s availability with their upcoming seminar, gala, annual conference, corporate function, and grand opening. Our close relationship with Mike Dunlap’s booking agent and management team further enables us to provide inquiring clients with Mike Dunlap’s speaking fee and appearance cost.

If your goal is to hire Mike Dunlap to be your next keynote speaker or to be the next brand ambassador our celebrity speakers bureau can assist. If Mike Dunlap’s booking fee is outside your companies budget or your unable to align with his appearance availability, our booking agents can provide you a list of talent that aligns with your event theme, budget and event date.

Mike Dunlap was born May 27, 1957 and is currently the head coach of the Loyola Marymount. He was hired in 2012 to replace Paul Silas after the Bobcats' 2011-2012 season, in which the team had the worst winning percentage in NBA history. He previously served as the interim head coach and assistant coach at St. John's University, and head coach at Metro State.

He also served as the assistant coach for the Denver Nuggets from 2006 to 2008.

While at Metro State, Dunlap led his team to NCAA titles in 2000 and 2002. He posted an overall record of 248–50, leading the Roadrunners to nine NCAA Tournament appearances in each of his nine seasons as head coach (1997–2006).

Dunlap also served three seasons in Australia (1994-1996) as head coach of the Adelaide 36ers in the National Basketball League, taking the team to the NBL Grand Final in 1994 against the North Melbourne Giants and the semi-finals in 1995 and 1996. Over his three season in Adelaide Dunlap compiled a 59-36 record before returning to the USA just weeks before the 1997 season following the sudden death of his father, though it was incorrectly reported at the time the move was because of a fallout between Dunlap and 36ers management. Dunlap is credited as the coach who kick-started the NBL career of the 36ers all-time leading home grown player Brett Maher in the 1994 season (Maher had debuted for the 36ers in 1992 and would go on to be the leading point scorer (8,941) and games record holder at the club (526), captaining the team to 3 NBL titles as well as having a distinguished international career for the Australian Boomers before retiring in 2009).

In the 2011-12 NBA season the Charlotte Bobcats record was an NBA worst ever 7–59. In the early part of the 2012-13 season, Dunlap led the Bobcats to a 7–5 record, with Charlotte matching its win total from the previous season. However, at that point, the Bobcats began a losing streak that lasted for eighteen games.