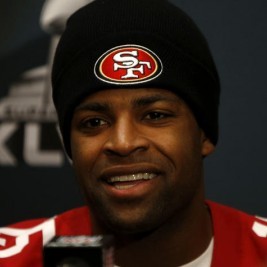 If your goal is to hire Michael Crabtree to be your next keynote speaker or to be the next brand ambassador our celebrity speakers bureau can assist. If Michael Crabtree’s booking fee is outside your companies budget or your unable to align with his appearance availability, our booking agents can provide you a list of talent that aligns with your event theme, budget and event date.

Michael Crabtree is an American football wide receiver for the Oakland Raiders of the National Football League (NFL). He was drafted by the San Francisco 49ers tenth overall in the 2009 NFL Draft. He played college football at Texas Tech, where he was a two-time unanimous All-American and twice won the Fred Biletnikoff Award.

He started his career by accepting an athletic scholarship to attend Texas Tech University and played for Texas Tech Red Raiders football from 2006 to 2008. He played a quarterback during High School for the Carter Cowboys and passed 870 yards and eleven touchdowns on 45 completions out of 100 attempts. He also ran for 646 yards and nine touchdowns on 100 carries. He was a four-star football recruit athlete. He was redshirted his freshman season due to transcript glitch and the position changed from QB to WR. In 2007, his sophomore year he started his redshirt-freshman season against SMU and stood 106 yards receiving twelve receptions for three touchdowns.

On April 13, 2015, Crabtree signed a one-year, $3 million contract with the Oakland Raiders.