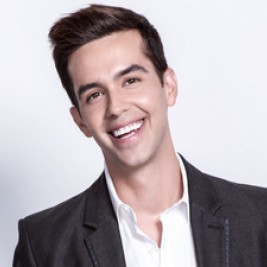 If your goal is to hire Michael Carbonaro to be your next keynote speaker or to be the next brand ambassador our celebrity speakers bureau can assist. If Michael Carbonaro’s booking fee is outside your companies budget or your unable to align with his appearance availability, our booking agents can provide you a list of talent that aligns with your event theme, budget and event date.

Michael Carbonaro was born April 28, 1976 and is an actor, magician, and improv artist. He is known for his hidden-camera "Magic Clerk" segments on The Tonight Show, in which he tricks unsuspecting customers at a convenience store. This led to a television series with a similar premise, The Carbonaro Effect, which premiered on TruTV on May 15, 2014, following a preview episode on April 1, 2014.

Born and raised in Oakdale, New York, on Long Island, the younger of two sons of an electrician father and a nurse mother, he attended Connetquot High School in Bohemia, New York. He began performing magic professionally while growing up, earning his college tuition while still in his teens. He holds a bachelor's degree in drama from NYU Tisch School of the Arts.

In 2004, he was featured on Chappelle's Show on Comedy Central. Following that, Carbonaro played Andy Wilson in the 2006 comedy Another Gay Movie. For his work, he won the Outfest "Best Actor in a Feature Film" award. Carbonaro has also appeared on All My Children (2006), The Guiding Light (2006), and Law & Order: Special Victims Unit (2007).