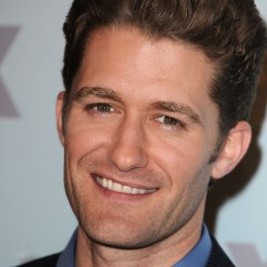 If your goal is to hire Matthew Morrison to be your next keynote speaker or to be the next brand ambassador our celebrity speakers bureau can assist. If Matthew Morrison’s booking fee is outside your companies budget or your unable to align with his appearance availability, our booking agents can provide you a list of talent that aligns with your event theme, budget and event date.

“At the end of the day, I’m a song and dance man,” says Matthew Morrison. Not that there was ever any doubt.

The Emmy, Tony and Golden Globe-nominated star may have come to national prominence through his role as the perpetually optimistic high school teacher Will Schuester on Fox TV’s “Glee,” but the Southern California native was turning heads years earlier on the Great White Way.

So it seems only appropriate that Morrison’s new album, “Where It All Began,” is a collection of standards, many first made famous in Broadway musicals.

After studying musical theater, vocal performance and dance at Tisch School of The Arts in New York, Morrison made his debut on Broadway in “Footloose,” followed by “The Rocky Horror Picture Show.” However, it was his role as Link Larkin in the original cast of the Broadway production of “Hairspray” that served as his breakthrough and led to Morrison being cast in the critically acclaimed “The Light In The Piazza.” His portrayal of young lover Fabrizio Naccarelli garnered him a Tony nomination for best performance by a featured actor in a musical. He subsequently received a Drama Desk nomination for outstanding actor in the off-Broadway musical “10 Million Miles” and reprised the role of Lieutenant Cable in Lincoln Center’s Tony-nominated production of “South Pacific.”

Morrison is the first artist signed to 222 Records, the new label started by Adam Levine, the leader of multi-platinum group Maroon 5. Following a stint on Mercury Records, Morrison is happy to be part of a label that is run by a fellow artist. “Adam’s been part of whole big label system and he knows completely what works and doesn’t,” Morrison says. “He wanted to make an artist-friendly label and he’s completely backed my vision 100%. He trusts what we’re doing.”