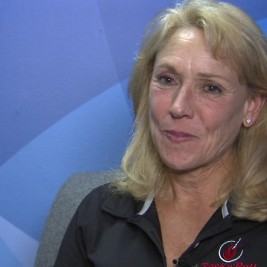 If your goal is to hire Mary Decker Slaney to be your next keynote speaker or to be the next brand ambassador our celebrity speakers bureau can assist. If Mary Decker Slaney’s booking fee is outside your companies budget or your unable to align with his appearance availability, our booking agents can provide you a list of talent that aligns with your event theme, budget and event date.

Mary Decker was born August 4, 1958 and is an American former track and field athlete, who holds seven American records in her sport. Making her international track debut as a pigtailed, 89-pound fourteen-year-old girl, "Little Mary Decker" became one of the most famous track and field competitors of her era.

Decker was heavily favored to win a gold medal at the 1984 Summer Olympics, held at Los Angeles. In the 3000 meters final, Zola Budd, half a stride ahead of Decker, moved to the inside lane, inadvertently crowding Decker, who collided with Budd and fell spectacularly to the curb. Decker's hip was injured and she was unable to resume the race.

In 2003, Decker was inducted into the USA Track and Field Hall of Fame, the Oregon Sports Hall of Fame in 2005 as well as being honored as one of the Rocky Mountains' greatest athletes ever.