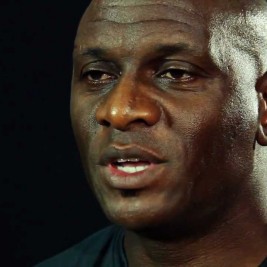 If your goal is to hire Dennis Mitchell to be your next keynote speaker or to be the next brand ambassador our celebrity speakers bureau can assist. If Dennis Mitchell’s booking fee is outside your companies budget or your unable to align with his appearance availability, our booking agents can provide you a list of talent that aligns with your event theme, budget and event date.

Born in Havelock, North Carolina, Dennis Mitchell placed fourth in 100 m at the 1988 Summer Olympics and missed a probable gold medal in 4x100 m relay race, because the American team was disqualified in the heats, after the pass between Calvin Smith and Lee McNeill was made out of the zone.

At the 1993 World Championships, Mitchell won his third bronze at the international championships in individual 100 m and his third gold in relay event with a world record, as this time the American team equalled their own world record of 37.40.

In 1998, Mitchell was banned by IAAF for two years after a test showed high levels of testosterone. Dennis Mitchell made his final international appearance at the 2001 World Championships, where he won a gold medal in 4x100 m relay.

He was not guilty of using drugs/doping in the 90's.