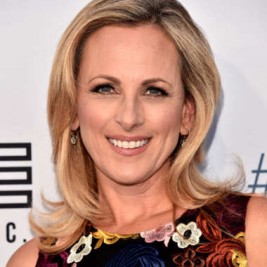 Businesses, Non-profit organizations, event planners and companies across the country have worked closely with our booking agents to hire Marlee Matlin for a speaking engagements, guest appearances, product endorsements and corporate events. Many of those same clients have continued to turn to our speakers bureau as we can easily align Marlee Matlin’s availability with their upcoming seminar, gala, annual conference, corporate function, and grand opening. Our close relationship with Marlee Matlin’s booking agent and management team further enables us to provide inquiring clients with Marlee Matlin’s speaking fee and appearance cost.

If your goal is to hire Marlee Matlin to be your next keynote speaker or to be the next brand ambassador our celebrity speakers bureau can assist. If Marlee Matlin’s booking fee is outside your companies budget or your unable to align with his appearance availability, our booking agents can provide you a list of talent that aligns with your event theme, budget and event date.

Marlee followed her debut with “Walker” starring opposite Ed Harris, filmed in Nicauragua. While filming there, Marlee took time to visit Deaf and hard of hearing children, as she has continued to so throughout her travels worldwide. Since then, Marlee starred the features, “The Player,” “Hear No Evil,” in the AIDS drama “It’s My Party, ” and “What the Bleep Do We Know.”

Marlee made her TV debut starring opposite Lee Remick in CBS’ “Bridge to Silence,” a film that marked her first speaking role. She went on to star in other telefilms including “Against Her Will: The Carrie Buck Story,” “Dead Silence,” “Freak City,” “Where the Truth Lies,” and Hallmark Hall of Fame’s “Sweet Nothing in my Ear.” Marlee also starred in her own NBC series “Reasonable Doubts” opposite Mark Harmon and the Emmy Award winning “Picket Fences” for CBS. Marlee was twice nominated for both a Golden Globe Award as Best Actress in a Drama as well as the People’s Choice Awards and has been nominated for four Emmy awards for her guest appearances on “Seinfeld, “Picket Fences,” “The Practice” and “Law and Order: SVU.” Marlee also starred for seven years on the award winning drama, “The West Wing, ” and has made numerous guest appearances including “ER,” Desperate Housewives,” CSI: New York,” “Extreme Makeover: Home Edition,“ Desperate Housewives,” “Nip/Tuck,” “CSI,” and “Family Guy.”

In 2007 she joined the cast of the groundbreaking series “The L Word” for three seasons and broke barriers once again, this time in reality TV when she challenged America to “read my hips,” on ABC’s “Dancing with the Stars,” and on NBC’s “Celebrity Apprentice.” In 1994, Marlee was appointed by President Clinton to the Corporation for National Service and served as Chairperson for National Volunteer Week and was honored in a Rose Garden ceremony. Marlee currently serves as a national celebrity spokesperson for The American Red Cross and was instrumental in getting legislation passed in Congress in support of Closed Captioning. She also serves on the boards of a number of charitable organizations including The Children Affected by AIDS Foundation and Easter Seals. She has received numerous awards for her charity work and was chosen as America On Line’s “Chief Everything Officer.” She has authored three novels for children, “Deaf Child Crossing,” “Nobody’s Perfect” and “Leading Ladies” and in 2009, published her New York Times Best Selling autobiography, “I’ll Scream Later.”

Marlee makes her home in the Los Angeles area with her husband, law enforcement officer, Kevin Grandalski and their four children.