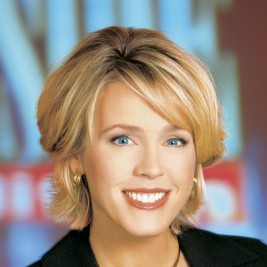 If your goal is to hire Deborah Norville to be your next keynote speaker or to be the next brand ambassador our celebrity speakers bureau can assist. If Deborah Norville’s booking fee is outside your companies budget or your unable to align with his appearance availability, our booking agents can provide you a list of talent that aligns with your event theme, budget and event date.

Since 1995, Deborah Norville has been host of the syndicated American television program Inside Edition. Having achieved considerable success at a very young age in the highly competitive field of network television news, Norville suffered a near fatal blow to her career in her mid 30s when she was replaced as co-host of the prestigious Today program on NBC.

After serving as a reporter and an anchor for local television stations first in Atlanta and then Chicago, in 1987, Norville, at age 28, was named anchor of NBC News at Sunrise, the network's early morning newscast which aired just prior to the Today program. Throughout the late 1980s she was seen on Today as a regular substitute for host Bryant Gumbel, co-host Jane Pauley, and news anchor John Palmer.

By 1989, Norville replaced Palmer at the Today newsdesk and he assumed her previous role on Sunrise. She also began substituting for Tom Brokaw on NBC Nightly News. Shortly after Norville's appointment as Today's news anchor, the decision was made to feature Norville as an unofficial third host. Whereas Palmer had read the news from a desk separate from where Gumbel and Pauley sat, Norville was seated alongside the program's hosts at the opening and closing of every show. Before long, gossip columns and media observers predicted that NBC would remove Jane Pauley from the program and replace her with Norville in an effort to improve the program's recently declining viewership by young women -- the demographic most coveted by morning shows.

By late 1989, it was announced that 13 year veteran Jane Pauley would leave Today at the end of the year. NBC, as expected, announced that Norville would become co-host. An emotional Norville hugged Pauley on the air after the announcement was made, and many at NBC hoped the negative press generated by Norville's increased presence on the program would now end. It did not. Prior to the announcement of Pauley's departure, much of the criticism had focused on Norville's youth and beauty, with many branding her "the other woman" and a "home wrecker," in a reference to what some felt seemed like her intent on "breaking up" the television marriage of Gumbel and Pauley. In truth, Norville was never in a managerial capacity nor did she have any decision making authority on the show.

Negative press only heightened after the announcement of Pauley's resignation, and Norville was put under a gag order by NBC brass which prevented her from defending herself from the widespread and erroneous reports that she somehow orchestrated her rise on Today. In January 1990, the new anchor team of Bryant Gumbel and Deborah Norville, minus Jane Pauley, debuted with disastrous results. Ratings for the program began to plummet. Critics felt that Gumbel and Norville lacked chemistry and many loyal viewers began turning to rival ABC's Good Morning America (GMA). Whereas Jane Pauley had excelled at being deferential to the aggressive Gumbel, Norville, it was observed, was not by nature a passive person. She thus fit uncomfortably into a role in which her chief duty was to play off of his lead.

In the September 1990, Norville announced that she and her husband were expecting a child in the following year. It was hoped that motherhood would help soften Norville's image as a too-pretty, too-icy newswoman, but her pregnancy announcement was essentially unnoticed by critics. At about the same time, NBC devised what it hoped would be solution to the growing unpopularity of the show. Though it had been rumored that Norville would be fired, NBC announced that she would remain in her position and that Joe Garagiola, former Major League Baseball player, game show host, MLB on NBC announcer, and Today contributor from 1969-1970, would join Norville as a co-host alongside Bryant Gumbel. Also, CBS newswoman Faith Daniels would become the program's news anchor -- a position which was still unfilled since Norville became co-host -- and little known news correspondent Katie Couric would become the program's first chief national correspondent.

The changes accomplished nothing in the way of stopping the ratings decline. By the end of 1990, Today, the longtime dominant program, was officially the second place morning show behind GMA, and most of the blame was pinned on Norville. By the outbreak of The Gulf War in 1991, Norville saw her role as co-host continually minimized. Today aired special editions of the program called America at War, with Gumbel anchoring most of the show alone. It was not uncommon for Norville not to even make an appearance until the two hour show's second half hour. In addition, she was directed not to initiate conversation on the show and only speak when asked a question by Gumbel. Nearing the end of her pregnancy which became complicated with a condition known as toxemia, Norville left the show for maternity leave in February 1991. It was announced that Katie Couric would substitute co-host during Norville's absence. Ratings for the program rose immediately following Norville's departure and Couric's arrival.

Midway though her maternity leave, Norville was interviewed by People. In the story, she avoided conversation about her recent trouble on Today, and instead focused on her newborn baby boy. She was photographed breastfeeding her son, a seemingly innocuous event, but NBC management was said to be greatly displeased by this, believing the photo to be in poor taste. By April 1991, in light of improved ratings on Today and NBC's displeasure at the People photograph, it was announced that Norville would not return to Today and that Katie Couric had been named the program's co-host. Norville, it was disclosed, would continue to be paid in accordance with her contract, although she would no longer appear on any NBC News programs.

In 2008, Deborah Norville launched Deborah Norville Collection of knit and crochet yarns in partnership with Premier Yarns, a North Carolina-based yarn manufacturer. Norville debuted the line at the 2009 Craft Hobby Show, the craft industry’s premier convention, where she also served as the Keynote Speaker. The Norville yarn line and other knit and crochet accessories are available in top craft stores and online.