Search Mario Andretti
One of the greatest race car drivers of all time. 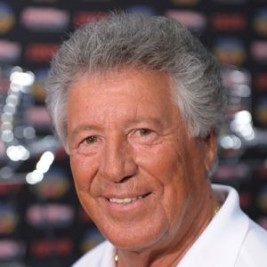 Businesses, Non-profit organizations, event planners and companies across the country have worked closely with our booking agents to hire Mario Andretti for a speaking engagements, guest appearances, product endorsements and corporate events. Many of those same clients have continued to turn to our speakers bureau as we can easily align Mario Andretti’s availability with their upcoming seminar, gala, annual conference, corporate function, and grand opening. Our close relationship with Mario Andretti’s booking agent and management team further enables us to provide inquiring clients with Mario Andretti’s speaking fee and appearance cost.

If your goal is to hire Mario Andretti to be your next keynote speaker or to be the next brand ambassador our celebrity speakers bureau can assist. If Mario Andretti’s booking fee is outside your companies budget or your unable to align with his appearance availability, our booking agents can provide you a list of talent that aligns with your event theme, budget and event date.

Mario Andretti is a retired Italian American world champion racing driver, one of the most successful Americans in the history of the sport. He is one of only two drivers to win races in Formula One, IndyCar, World Sportscar Championship and NASCAR. He also won races in midget cars, and sprint cars. During his career, Andretti won the 1978 Formula One World Championship, four IndyCar titles, and IROC VI. To date, he remains the only driver ever to win the Indianapolis 500, Daytona 500, and the Formula One World Championship, and, along with Juan Pablo Montoya, the only driver to have won a race in the NASCAR Sprint Cup Series, Formula One, and an Indianapolis 500. No American has won a Formula One race since Andretti's victory at the 1978 Dutch Grand Prix. Andretti had 109 career wins on major circuits.Andretti had a long career in racing. He was the only person to be named United States Driver of the Year in three decades. He was also one of only three drivers to win races on road courses, paved ovals, and dirt tracks in one season, a feat that he accomplished four times.With his final IndyCar win in April 1993, Andretti became the first driver to win IndyCar races in four different decades and the first to win automobile races of any kind in five. In American popular culture, his name has become synonymous with speed, similar to Barney Oldfield in the early twentieth century and Stirling Moss in the United Kingdom.