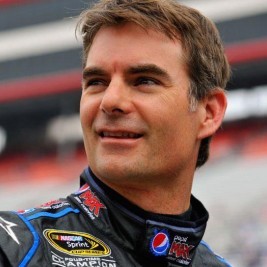 Businesses, Non-profit organizations, event planners and companies across the country have worked closely with our booking agents to hire Jeff Gordon for a speaking engagements, guest appearances, product endorsements and corporate events. Many of those same clients have continued to turn to our speakers bureau as we can easily align Jeff Gordon’s availability with their upcoming seminar, gala, annual conference, corporate function, and grand opening. Our close relationship with Jeff Gordon’s booking agent and management team further enables us to provide inquiring clients with Jeff Gordon’s speaking fee and appearance cost.

If your goal is to hire Jeff Gordon to be your next keynote speaker or to be the next brand ambassador our celebrity speakers bureau can assist. If Jeff Gordon’s booking fee is outside your companies budget or your unable to align with his appearance availability, our booking agents can provide you a list of talent that aligns with your event theme, budget and event date.

Jeff Gordon is an American professional stock car racing driver. He currently drives the No. 24 Chevrolet SS for Hendrick Motorsports in the NASCAR Sprint Cup Series.

Gordon started his racing career in the Busch Series with Hugh Connerty Racing, followed by Bill Davis Racing, winning three races, and began racing full-time in the Cup Series for Hendrick Motorsports in 1993. He is a four-time Sprint Cup champion, winning the title in 1995, 1997, 1998, and 2001. He has also won the Daytona 500 three times in 1997, 1999, and 2005. He is third on the all-time Cup wins list, with 92 career wins, the most in NASCAR's modern era (1972–present). Gordon's 80 pole positions lead all active drivers, and is third all-time; Gordon won at least one pole in 23 consecutive seasons, making this a NASCAR record. He is also the active iron man leader for consecutive races participated in with 779 as of the 2015 Quaker State 400.

In 1998, NASCAR named Gordon to its 50 Greatest Drivers list. In 2008, ten years later, ESPN's Terry Blount ranked him 10th in the 25 Greatest Drivers of All-Time. Foxsports.com named him as the fifth-best NASCAR driver of all time.

Gordon, along with Rick Hendrick, co-owns the No. 48 Chevrolet driven by Jimmie Johnson, who won six Cup championships from 2006 to 2010 and in 2013. Gordon also has an equity stake in his own No. 24 team. Gordon also owned a Busch Series team between 1999 and 2000, Gordon/Evernham Motorsports (co-owned with Ray Evernham; later solely owned as JG Motorsports), winning twice. Gordon was born in Vallejo, California, raised in Pittsboro, Indiana, and currently resides in Charlotte, North Carolina, with his wife, Ingrid Vandebosch, and their two children Ella Sofia and Leo Benjamin.