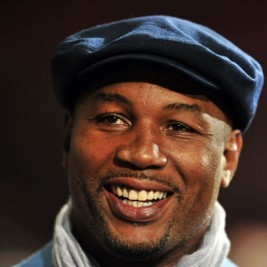 Businesses, Non-profit organizations, event planners and companies across the country have worked closely with our booking agents to hire Lennox Lewis for a speaking engagements, guest appearances, product endorsements and corporate events. Many of those same clients have continued to turn to our speakers bureau as we can easily align Lennox Lewis’s availability with their upcoming seminar, gala, annual conference, corporate function, and grand opening. Our close relationship with Lennox Lewis’s booking agent and management team further enables us to provide inquiring clients with Lennox Lewis’s speaking fee and appearance cost.

If your goal is to hire Lennox Lewis to be your next keynote speaker or to be the next brand ambassador our celebrity speakers bureau can assist. If Lennox Lewis’s booking fee is outside your companies budget or your unable to align with his appearance availability, our booking agents can provide you a list of talent that aligns with your event theme, budget and event date.

Lewis turned professional in 1989, winning his first 21 fights before he knocked out Donovan Ruddock in 1992 to take over the number one position in the World Boxing Council (WBC) rankings. He was declared WBC heavyweight champion in December 1992 after Riddick Bowe was stripped of the title. Lewis lost the title to Oliver McCall in 1994 but defeated McCall in a rematch to win the vacant WBC title in 1997. He defended the title four times before becoming the Lineal Champion when he beat Shannon Briggs by knockout in 1998. He became undisputed champion when he defeated Evander Holyfield in November 1999. In 2001 he was knocked out by Hasim Rahman, but again avenged the defeat in a rematch to regain his titles. After defeating Mike Tyson by knockout in 2002 and stopping Vitali Klitschko in 2003, Lennox Lewis retired from boxing in 2004.