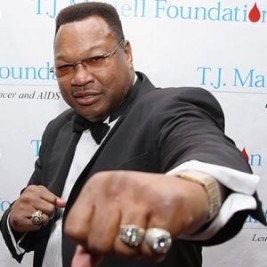 Businesses, Non-profit organizations, event planners and companies across the country have worked closely with our booking agents to hire Larry Holmes for a speaking engagements, guest appearances, product endorsements and corporate events. Many of those same clients have continued to turn to our speakers bureau as we can easily align Larry Holmes’s availability with their upcoming seminar, gala, annual conference, corporate function, and grand opening. Our close relationship with Larry Holmes’s booking agent and management team further enables us to provide inquiring clients with Larry Holmes’s speaking fee and appearance cost.

If your goal is to hire Larry Holmes to be your next keynote speaker or to be the next brand ambassador our celebrity speakers bureau can assist. If Larry Holmes’s booking fee is outside your companies budget or your unable to align with his appearance availability, our booking agents can provide you a list of talent that aligns with your event theme, budget and event date.

Holmes was born in Georgia, but lived the majority of his life in Easton, Pennsylvania, the town from which he garnered his boxing nickname, "The Easton Assassin."

Early on his career, Holmes served as a sparring partner for then heavyweight champion Muhammad Ali.

Holmes finally gained credibility as a contender when he upset Earnie Shavers in 1978 winning almost every round of a 12 round bout. This set up a title shot with WBC heavyweight champion Ken Norton. Holmes won the WBC heavyweight title on June 9, 1978, defeating Norton in 15 rounds.

In October 1980, a war weary Ali came out of retirement and faced Holmes. Ali's trainer, Angelo Dundee, stopped the fight after the 10th.

In September 1985, Holmes suffered the toughest loss of his career when he lost his title to undisputed world light heavyweight champion Michael Spinks by a close decision. Had Holmes been victorious against Spinks, he would have tied Marciano's record.

In April 1986, Holmes lost a controversial rematch with Spinks by a split decision. Holmes didn't fight again until January 1988 when Mike Tyson, the reigning undisputed world heavyweight champion, knocked an aging and rusty Holmes out in the fourth round. Holmes retired after the fight.

In 1990, Holmes made a comeback. In 1992, he upset the undefeated 1988 Olympic heavyweight Gold Medalist "Merciless" Ray Mercer. Later that year, Holmes got another shot at the world title, but lost a decision to Evander Holyfield. Holmes got his final title shot in 1994 when, at the age of 45, he came within one point on two cards of winning the WBC heavyweight title from Oliver McCall. Holmes won his final fight, a decision victory against Eric "Butterbean" Esch in 2002 to run his career record to 69-6 with 44 KOs.

Holmes, along with George Foreman, is regarded as having one of the greatest left jabs in heavyweight boxing history.