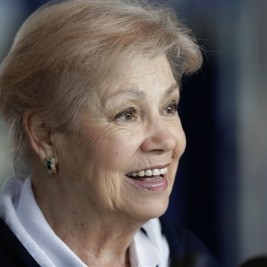 If your goal is to hire Larisa Latynina to be your next keynote speaker or to be the next brand ambassador our celebrity speakers bureau can assist. If Larisa Latynina’s booking fee is outside your companies budget or your unable to align with his appearance availability, our booking agents can provide you a list of talent that aligns with your event theme, budget and event date.

Born on December 27, 1934, Larisa Latynina is a former Soviet gymnast. She was 19 years old when she debuted internationally at the 1954 Rome World Championships, winning the gold medal in the team competition. During the 1956 Summer Olympics, she became the most successful gymnast of the Olympics and their team, the Soviet also won in the team event. She also won gold medals on the floor and vault, a silver medal on the uneven bars, and a bronze medal in the now discontinued team event with portable apparatus. She was the favorite for the 1960 Summer Olympics in Rome after her very successful World Olympics Championship in the year 1958. She won all-around titles at the 1962 World Championships. She was actually the second on the list of most Olympic gold medalists as she won nine gold medals, the only woman to win these awards. She was known to have more Olympic medals both in individual and team events from 1964 until 2012. She is the only woman who has won an all-around medal and won an individual event in more than two Olympiads, one of only three women who have won every individual event at either the World Championship or Olympic level, and the only female gymnast to have won team gold, All-Around gold and an event final gold at the same Olympics. She retired from her career after the 1966 World Championships and after that she became a coach for the Soviet national gymnastics team until the year 1977. The Soviet women, under her coaching won team gold in the 1968, 1972 and 1976 Olympics. She also organized the gymnastics competition at the 1980 Olympic Games held in Moscow and was credited in helping the Soviet Union to become a dominant force in gymnastics.