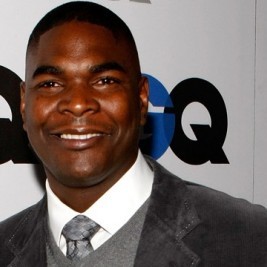 If your goal is to hire Keyshawn Johnson to be your next keynote speaker or to be the next brand ambassador our celebrity speakers bureau can assist. If Keyshawn Johnson’s booking fee is outside your companies budget or your unable to align with his appearance availability, our booking agents can provide you a list of talent that aligns with your event theme, budget and event date.

Three-Time Pro Bowl wide receiver, Keyshawn Johnson was born on July 22, 1972 in Los Angeles, California. Currently an ESPN analyst, he retired from football on May 23, 2007 after an eleven-year career in the NFL, playing with the Jets, Buccaneers, Cowboys, and Panthers.

Playing for USC, Johnson was a two-time All-American selection, leading the USC Trojans to wins in the Cotton Bowl and the Rose Bowl. He caught 12 passes for a Rose Bowl record 216 yards and 1 TD in the Trojans' 41-32 victory over the Northwestern Wildcats, earning the game's MVP honors. He wore the number 3 in college.

The top overall selection in the 1996 NFL Draft, Johnson spent the first few years of his professional career with the New York Jets, who drafted him with. He was the first wide receiver selected with the number one overall pick since Irving Fryar was chosen by New England in 1984 . While in New York, he played three seasons (1997-1999) under Bill Parcells.

His all-around game has earned him selection to the Pro Bowl three times - 1998 and 1999 with the N.Y. Jets and 2001 with Tampa Bay. Keyshawn Johnson finished his career with 814 receptions, tying him at 17th all-time with Henry Ellard for career NFL recptions. His 10,571 yards receiving is the 24th highest total in NFL history. In reaching the 600 career receptions plateau in 118 games, he tied Herman Moore for the second fewest number of games needed in NFL history to reach that mark, and he became one of only three players in league history (Moore and Marvin Harrison) to reach 600 receptions in less than 120 games. He caught 512 passes in his first 100 games to rank as the fourth most receptions in a player's first 100 games

Johnson was part of the 2007 NFL Draft broadcasting team with Chris Berman, Mel Kiper Jr. and Chris Mortensen that aired on ESPN. It was announced that he will become an ESPN analyst for Sunday NFL Countdown, and Monday Night Countdown. He will also be an analyst on several ESPN telecasts, including pre-game shows on Sundays and Monday nights, and some radio work as well. He is also an analyst on the ESPN Who's Now competition.