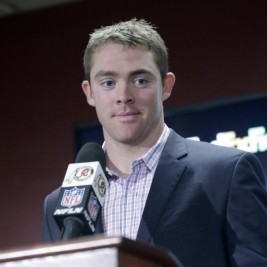 Businesses, Non-profit organizations, event planners and companies across the country have worked closely with our booking agents to hire Colt McCoy for a speaking engagements, guest appearances, product endorsements and corporate events. Many of those same clients have continued to turn to our speakers bureau as we can easily align Colt McCoy’s availability with their upcoming seminar, gala, annual conference, corporate function, and grand opening. Our close relationship with Colt McCoy’s booking agent and management team further enables us to provide inquiring clients with Colt McCoy’s speaking fee and appearance cost.

If your goal is to hire Colt McCoy to be your next keynote speaker or to be the next brand ambassador our celebrity speakers bureau can assist. If Colt McCoy’s booking fee is outside your companies budget or your unable to align with his appearance availability, our booking agents can provide you a list of talent that aligns with your event theme, budget and event date.

Colt McCoy is an American football quarterback for the Washington Redskins of the National Football League. He was drafted by the Cleveland Browns in the third round of the 2010 NFL Draft, after playing college football for the University of Texas. He has also been a member of the San Francisco 49ers.

McCoy was the starting quarterback for the Texas Longhorns from 2006–2009 and won the 2008 Walter Camp Award, was the 2008 Heisman Trophy runner-up and was a 2009 Heisman finalist. McCoy is second to Boise State's Kellen Moore in games won by a NCAA Division I quarterback. In his senior year, he won 13 of the top 15 major college player awards including quarterback of the year, offensive player of the year and outstanding football player of the year.