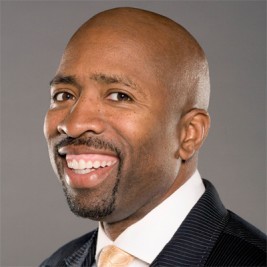 Businesses, Non-profit organizations, event planners and companies across the country have worked closely with our booking agents to hire Kenny Smith for a speaking engagements, guest appearances, product endorsements and corporate events. Many of those same clients have continued to turn to our speakers bureau as we can easily align Kenny Smith’s availability with their upcoming seminar, gala, annual conference, corporate function, and grand opening. Our close relationship with Kenny Smith’s booking agent and management team further enables us to provide inquiring clients with Kenny Smith’s speaking fee and appearance cost.

If your goal is to hire Kenny Smith to be your next keynote speaker or to be the next brand ambassador our celebrity speakers bureau can assist. If Kenny Smith’s booking fee is outside your companies budget or your unable to align with his appearance availability, our booking agents can provide you a list of talent that aligns with your event theme, budget and event date.

Kenny Smith, nicknamed "The Jet," is a retired American professional basketball player who played in the National Basketball Association and went on to become a TV basketball analyst, primarily for Inside the NBA on TNT and for CBS/Turner during the NCAA Men's Division I Basketball Tournament.

Smith was selected as a 6-foot-3, 170-pound point guard by the Sacramento Kings with the sixth pick of the 1987 NBA draft. He played in the NBA from 1987 to 1997 as a member of the Sacramento Kings, Atlanta Hawks, Houston Rockets, Detroit Pistons, Orlando Magic, and Denver Nuggets. In his professional career, Smith scored 9,397 points and recorded 4,073 assists. He won two NBA championships with the Rockets in 1994 and 1995. In the first game of the 1995 Finals against the Orlando Magic, Smith made seven three-pointers, including a game-tying shot which sent the game into overtime. The Rockets won the game 120–118 and swept the series for their second consecutive title.

Smith joined Turner Sports in 1998. He has teamed with Ernie Johnson Jr., Charles Barkley, and Shaquille O'Neal on Inside the NBA, a winner of the Sports Emmy Award for Outstanding Studio Show. He occasionally appears on NBA TV as an analyst. He also served a stint as an analyst for the MSG Network's broadcasts of New York Knicks games from 2005–08, and has worked as an analyst for CBS/Turner during the NCAA Men's Division I Basketball Tournament.