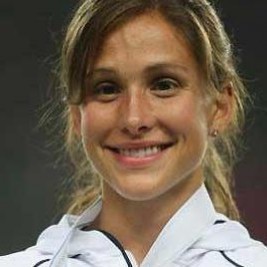 Businesses, Non-profit organizations, event planners and companies across the country have worked closely with our booking agents to hire Kara Goucher for a speaking engagements, guest appearances, product endorsements and corporate events. Many of those same clients have continued to turn to our speakers bureau as we can easily align Kara Goucher’s availability with their upcoming seminar, gala, annual conference, corporate function, and grand opening. Our close relationship with Kara Goucher’s booking agent and management team further enables us to provide inquiring clients with Kara Goucher’s speaking fee and appearance cost.

If your goal is to hire Kara Goucher to be your next keynote speaker or to be the next brand ambassador our celebrity speakers bureau can assist. If Kara Goucher’s booking fee is outside your companies budget or your unable to align with his appearance availability, our booking agents can provide you a list of talent that aligns with your event theme, budget and event date.

Kara Goucher was born on July 9, 1978 and is an American long-distance runner. She was the 10,000 meters bronze medalist at the 2007 World Championships in Athletics and represented her country at the 2008 Beijing Olympics and 2012 London Olympics. She made her marathon debut in 2008 and finished third at the Boston Marathon. She competed collegiately for the University of Colorado and was a three-time NCAA (twice in track and once in cross country) champion. After college Goucher battled injuries for several years, but then came back strong in 2006. After finishing second in the 5K at the USATF Outdoor Championships in 2006, she set PRs at all distances on the international circuit, running the World “A” Standard in the 1500 m, 5000 m, and 10000 m. She finished third in 3000 metres at the 2006 IAAF World Cup in a new personal best time of 8:41.42. Her 3k time led the nation and her 10k time ranked her as the 2nd fastest American woman of all-time. At the 2007 IAAF World Championships in Osaka, Japan she won the bronze medal in the women's 10,000 m event. In September 2007, she won the Great North Run in 1:06:57, the fastest woman's half-marathon time of the year, setting a new American best time at the distance and beating marathon world record-holder Paula Radcliffe, on the latter's comeback from pregnancy and injury. The half-marathon was Goucher's first competitive race longer than 10k. Goucher kicked off 2008 with a win in the prestigious Millrose Games mile with a personal record of 4:36:03. At the 2008 Prefontaine Classic track meet in Eugene, Oregon, USA, Goucher ran the 5000 m, the same race as the World Record attempt by Meseret Defar. Goucher ran well to place third behind Defar and Kenyan Vivian Cheruiyot in her second fastest ever time of 14:58.10 minutes. Goucher was formerly a member of the Nike Oregon Project, a project designed to improve standards in American distance running. There she trained with fellow athletes Galen Rupp, her husband Adam Goucher, Josh Rohatinsky, and Amy Yoder Begley Goucher raced in the USATF Championships and Olympic Trials on June 27, 2008, in the 5000 m and the 10,000 m. The championships were held at Hayward Field, Eugene, Oregon. Goucher already had the Olympic A Standard, but achieved it again, recording 31:37.72 at 10,000 m, finishing second behind American record-holder Shalane Flanagan's 31:34.81. In the 5000 m, Goucher won her semi final heat with a time of 15:32.32, and won the final race with a time of 15:01.02. Goucher competed in the Beijing 2008 Summer Olympics 10,000 m final where she placed tenth with a personal best time of 30:55.16, and the 5000 m where she placed ninth with a time of 15:49.39. Goucher made her marathon debut at the New York City Marathon on November 2, 2008. She finished in third place in a time of 2:25:53, becoming the first American on the podium since Anne Marie Lauck was third in 1994. Goucher was chosen as the 2008 Road Runner of the Year in the Open Female division by the Road Runners Club of America. The next year, she won the 2009 Lisbon Half Marathon, and placed third in the 2009 Boston Marathon in a time of 2:32:25. She finished tenth in the marathon at the 2009 World Championships in Athletics, with a time of 2:27:48. Goucher became pregnant in early 2010 and took a season away from competition as a result. Following the birth of her child, Colt, she returned to competition at the Arizona Half Marathon in January 2011, and finished as the runner-up behind Madaí Pérez. At the 2011 New York City Half Marathon, she placed third with a time of 1:09:03 hours. In April 2011, Goucher returned to marathoning at the 2011 Boston Marathon, where she placed fifth with a time of 2:24:52 hours, setting a new personal best by a minute. She was runner-up to Shalane Flanagan over 10,000 m at the 2011 USA Outdoor Track and Field Championships and later ran in the event at the 2011 World Championships in Athletics, where she finished 13th overall. In December, she competed at the inaugural Miami Beach Half Marathon and was again second behind Flanagan. Goucher qualified for the 2012 Summer Olympics by placing third at the U.S. Olympic marathon trials on January 14, 2012 in Houston, finishing with a time of 2:26:06. She came third at the New York Half Marathon that March, running a time of 1:09:12 hours. Goucher placed 11th in the 2012 Summer Olympics with a time of 2:26.07. She returned to the 2013 Boston Marathon on April 15th, placing 6th with a time of 2:28:11. The event would later be disrupted by a pair of consecutive explosions near the finish line, killing three spectators and injuring over 180 others. At the time of the explosions, she was resting in her hotel room with her family, the blasts close enough to shake the windows to their room.