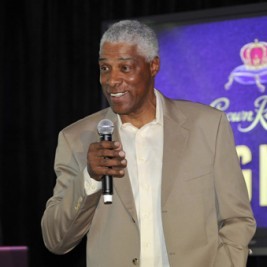 Businesses, Non-profit organizations, event planners and companies across the country have worked closely with our booking agents to hire Julius Erving for a speaking engagements, guest appearances, product endorsements and corporate events. Many of those same clients have continued to turn to our speakers bureau as we can easily align Julius Erving’s availability with their upcoming seminar, gala, annual conference, corporate function, and grand opening. Our close relationship with Julius Erving’s booking agent and management team further enables us to provide inquiring clients with Julius Erving’s speaking fee and appearance cost.

If your goal is to hire Julius Erving to be your next keynote speaker or to be the next brand ambassador our celebrity speakers bureau can assist. If Julius Erving’s booking fee is outside your companies budget or your unable to align with his appearance availability, our booking agents can provide you a list of talent that aligns with your event theme, budget and event date.

Known by the nickname Dr. J, Julius Erving born February 22, 1950 and raised in Roosevelt, New York), , who helped launch a modern style of play that emphasizes leaping and play above the rim.

Erving won three championships, four Most Valuable Player Awards, and three scoring titles while playing with the ABA's Virginia Squires and New York Nets and the NBA's Philadelphia 76ers. He is the fifth-highest scorer in professional basketball history, with 30,026 points (NBA and ABA combined).