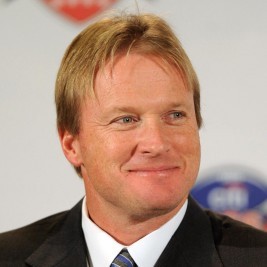 Businesses, Non-profit organizations, event planners and companies across the country have worked closely with our booking agents to hire Jon Gruden for a speaking engagements, guest appearances, product endorsements and corporate events. Many of those same clients have continued to turn to our speakers bureau as we can easily align Jon Gruden’s availability with their upcoming seminar, gala, annual conference, corporate function, and grand opening. Our close relationship with Jon Gruden’s booking agent and management team further enables us to provide inquiring clients with Jon Gruden’s speaking fee and appearance cost.

If your goal is to hire Jon Gruden to be your next keynote speaker or to be the next brand ambassador our celebrity speakers bureau can assist. If Jon Gruden’s booking fee is outside your companies budget or your unable to align with his appearance availability, our booking agents can provide you a list of talent that aligns with your event theme, budget and event date.

Gruden then went on to be an assistant coach at the University of the Pacific (which no longer has a team) in Stockton, CA. He quit that job to become a "coffee boy" at the San Francisco 49ers headquarters. While not making donut runs, Gruden would hide behind doors leading to coaches meetings and secretly take notes so he could learn the pro game.

He then officially broke into professional football as an offensive assistant coach for the San Francisco 49ers in 1990, Gruden quickly ascended through the ranks of NFL coaching by learning, implementing, and improving the famous West Coast offense pioneered by longtime NFL coach Bill Walsh. When Mike Holmgren left the 49ers to become head coach of the Green Bay Packers in 1992, he took the promising and young Gruden with him to become the team's wide receivers coach. After three seasons in Green Bay, Gruden moved on to become the offensive coordinator of the Philadelphia Eagles under former Packers assistant coach Ray Rhodes. Gruden then was chosen by the legendary owner and general manager of the Oakland Raiders, Al Davis, to be the Raiders' new head coach for the 1998 season.

After compiling a 40-28 win-loss record with the Raiders, Gruden moved on to the Tampa Bay Buccaneers in 2002, traded for several draft picks and $8 million in cash. The trade took place for a number of reasons, including Gruden's desire to run his own organization, Davis' desire to be rid of a talented coach who might challenge his decision-making authority on the Raiders, Gruden's contract expiring a year after the trade, and Davis' uncertainty whether Gruden was worth as much money as his next contract was sure to pay him.

Gruden also considered Tampa home. As a child, he was a frequent visitor to One Buccaneer Place while his father Jim worked there as a coach and personnel director between 1982 and 1986.

The high draft picks (two first round picks and two second round picks) given to the Raiders in the trade, and the large contract with which the Buccaneers awarded Gruden, sealed the deal that sent one of the NFL's promising young offensive minds to a franchise frustrated by its inability to reach the Super Bowl despite a league-dominating defense. Even though Bucs owner Malcolm Glazer demanded that Tony Dungy be fired after two years of miserable post-season losses to the Philadelphia Eagles in which the Bucs couldn't even score a touchdown, there were still many who believed that Dungy's dismissal was unfair and impatient, especially since he quickly became the winningest coach in Bucs history during his tenure. Even Gruden's hiring process was criticized, when the Glazers rejected Bucs general manager Rich McKay's initial choice of Marvin Lewis, and pursued Gruden themselves personally.

Immediately after arriving in Tampa, Gruden significantly retooled the offense with the addition of numerous free agents, including former New York Giants wide receiver Joe Jurevicius, former Jacksonville Jaguars wide receiver Keenan McCardell, former Arizona Cardinals running back Michael Pittman and former Indianapolis Colts tight end Ken Dilger. Gruden's determination to fix the underperforming offense so often maligned during Dungy's tenure inspired the Bucs defense to another #1 ranking, which helped the team to a 16-4 season and a win over Gruden's old team in Super Bowl XXXVII. Despite the impressive Super Bowl win, there were many people--including players on the Buccaneers like Warren Sapp and a number of sports analysts--who atrributed Gruden's win primarily to the smothering defense that coach Tony Dungy had created during his tenure with the Bucs, ignoring the major revamping that Gruden did on the offensive side of the ball. Nevertheless, Gruden publicly and graciously thanked Dungy for his contributions upon accepting the Lombardi Trophy at the Super Bowl XXXVII postgame ceremony.

In the two years following Gruden's Super Bowl win, the Bucs went 7-9 and 5-11 respectively, confirming to many Dungy supporters that Gruden simply took over an emerging and strong team from Dungy and then drove it into the ground with the acquisition of aging veterans who could no longer perform. However, the high draft picks sacrificed by the team to acquire Gruden, along with salary cap issues predicated by the now-departed Rich McKay--with whom Gruden had an acrimonious relationship--limited Gruden's ability to field the teams he wanted after that successful Super Bowl-winning season. The fading accuracy of kicker Martin Gramatica didn't help matters either, and this cost the Bucs many close games. When former Raiders general manager Bruce Allen joined the Bucs in 2004, Gruden finally had the general manager/head coach partnership he desired, and their past two drafts have yielded a number of impact players, including NFL 2005 Rookie of the Year Carnell "Cadillac" Williams.

The successful 2005 campaign went a long way to dispel any doubts critics had about Gruden's ability to coach. Before the season started, prognosticators across the board expected the Bucs to once again have a losing season and place last in the NFC South. When starting quarterback Brian Griese went down with a season-ending injury, and untested backup quarterback Chris Simms--son of former New York Giants quarterback Phil Simms--was thrust into the starting position, the season looked uncertain at best. After Simms' shaky start, Gruden coached the Bucs to a surprising 11-5 record and the team's first NFC South championship since 2002. Gruden was praised after the Bucs defeated the Redskins 36-35 for making a gutsy call to go for a last-minute two-point conversion to win the game. The call however remains controversial. Not to be outdone by the offense, the 2005 Bucs defense also reclaimed the #1 ranking in the NFL. Despite these accomplishments, the Bucs lost 17-10, with some equally contraversial calls as in their first meeting to the Washington Redskins in the first wild card game.

Gruden's tendency to make angry facial expressions at games has led him to receive the nickname "Chucky", as he has an uncanny resemblance to the killer doll in the "Child's Play" movies. He's also known to use extensive verbiage in his playbook.

Jon and his wife Cindy, have three sons, Jon II, Michael and Jayson. Jon is the older brother of Jay Gruden, former starting quarterback and current head coach of the Orlando Predators of the Arena Football League.