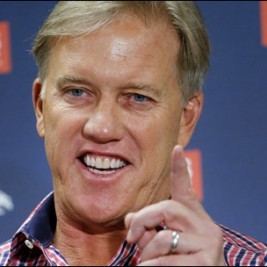 Businesses, Non-profit organizations, event planners and companies across the country have worked closely with our booking agents to hire John Elway for a speaking engagements, guest appearances, product endorsements and corporate events. Many of those same clients have continued to turn to our speakers bureau as we can easily align John Elway’s availability with their upcoming seminar, gala, annual conference, corporate function, and grand opening. Our close relationship with John Elway’s booking agent and management team further enables us to provide inquiring clients with John Elway’s speaking fee and appearance cost.

If your goal is to hire John Elway to be your next keynote speaker or to be the next brand ambassador our celebrity speakers bureau can assist. If John Elway’s booking fee is outside your companies budget or your unable to align with his appearance availability, our booking agents can provide you a list of talent that aligns with your event theme, budget and event date.

John Albert Elway, Jr.  is a former American football quarterback and current General Manager and Executive Vice President of Football Operations for the Denver Broncos of the National Football League (NFL). Elway played college football at Stanford and his entire 16-year professional career with the Denver Broncos. At the time of his retirement in early 1999, Elway recorded the most victories by a starting quarterback and statistically was the second most prolific passer in NFL history. He was also a prolific rusher of the ball, being one of only two players ever to score a rushing touchdown in four different Super Bowls (the other being Thurman Thomas) and the only quarterback to do so. (156 attempts) ]He led his teams to six AFC Championship Games and five Super Bowls, winning his last two.

Elway set several career records for passing attempts and completions while at Stanford and also received All-American honors. He was the first selection in the 1983 NFL Draft, famously known as the quarterback class of 1983, where he was taken by the Baltimore Colts before being traded to the Denver Broncos. In January 1987, Elway embarked on one of the most notable performances in sports and in NFL history, helping engineer a 98-yard, game-tying touchdown drive in the AFC Championship Game against the Cleveland Browns. The moment is known in National Football League lore as "The Drive." Following that game in Cleveland, Elway and the Broncos lost in Super Bowl XXI to the New York Giants. It was the first of a record five Super Bowl starts at quarterback for Elway, a record that he solely held until 2012, when Tom Brady earned his fifth Super Bowl start. In 2015, Tom Brady would break the record with his sixth Super Bowl start.

Elway was inducted into the Pro Football Hall of Fame in 2004 in his first year of eligibility. Since his retirement, Elway has owned several businesses, including co-ownership of the inactive Colorado Crush, an arena football team.