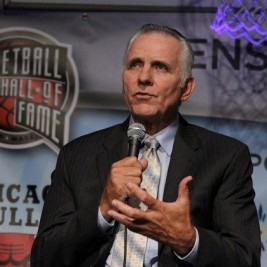 Businesses, Non-profit organizations, event planners and companies across the country have worked closely with our booking agents to hire Jerry Lucas for a speaking engagements, guest appearances, product endorsements and corporate events. Many of those same clients have continued to turn to our speakers bureau as we can easily align Jerry Lucas’s availability with their upcoming seminar, gala, annual conference, corporate function, and grand opening. Our close relationship with Jerry Lucas’s booking agent and management team further enables us to provide inquiring clients with Jerry Lucas’s speaking fee and appearance cost.

If your goal is to hire Jerry Lucas to be your next keynote speaker or to be the next brand ambassador our celebrity speakers bureau can assist. If Jerry Lucas’s booking fee is outside your companies budget or your unable to align with his appearance availability, our booking agents can provide you a list of talent that aligns with your event theme, budget and event date.

Jerry Ray Lucas is an American former basketball player and memory education expert. Famous first in basketball, he was a nationally-awarded high school player, national college star at Ohio State, and 1960 gold medal Olympian and international player before starring as a professional player in the National Basketball Association. As a collegian, Lucas led the Ohio State Buckeyes to the 1960 college national championship and three straight NCAA finals. He remains today the only three-time Big Ten Player Of The Year, and was also twice named NCAA Player Of The Year. As a pro, Lucas was named All-NBA First Team three times, a NBA All-Star seven times, was 1964 NBA Rookie Of The Year, and was named Most Valuable Player of the 1965 NBA All-Star Game among other honors and awards. He was inducted to the Springfield Basketball Hall Of Fame in 1980.

After his basketball career ended in the mid-1970's, Lucas took to becoming a teacher and writer in the area of image-based memory education. His book written with Harry Lorayne, The Memory Book, was a national best-seller. Lucas has also conducted seminars demonstrating memory techniques, and has written 30 books and educational products and games for children. He is known today as Doctor Memory.