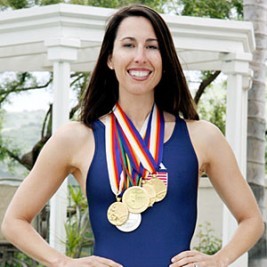 Businesses, Non-profit organizations, event planners and companies across the country have worked closely with our booking agents to hire Janet Evans for a speaking engagements, guest appearances, product endorsements and corporate events. Many of those same clients have continued to turn to our speakers bureau as we can easily align Janet Evans’s availability with their upcoming seminar, gala, annual conference, corporate function, and grand opening. Our close relationship with Janet Evans’s booking agent and management team further enables us to provide inquiring clients with Janet Evans’s speaking fee and appearance cost.

If your goal is to hire Janet Evans to be your next keynote speaker or to be the next brand ambassador our celebrity speakers bureau can assist. If Janet Evans’s booking fee is outside your companies budget or your unable to align with his appearance availability, our booking agents can provide you a list of talent that aligns with your event theme, budget and event date.

In 1989, Janet Evans won seven national championships. She took the 500- and 1,000-yard freestyle titles and the 400-yard individual medley at the short-course nationals, the 400- and 800-meter freestyles and the 200- and 400-meter medley events at the long-course nationals. Those performances won her the 1989 Sullivan Award as the country's outstanding amateur athlete of the year as well as the U. S. Olympic Committee's Sportswoman of the Year award.

Swimming for Stanford University, Evans won the 500- and 1,650-yard freestyle events at the 1990 and 1991 NCAA championships and she was the 400-yard individual medley titlist in 1990. However, she left school in 1991 because of a new NCAA rule limiting collegiate swimmers to only 20 hours of practice a week. At the 1992 Olympics, Evans claimed two more medals, a gold in the 800-meter freestyle and a silver in the 400-meter.

Janet Evans gave up the individual medley event in 1993 to focus on her freestyle swimming. The move paid off in another string of victories. She won the 400-, 800-, and 1500-meter events at the national spring and summer championships and was also 400- and 800-meter world champion that year.

She repeated her triple victories at both national meets again in 1994, but claimed only one world championship, in the 800-meter. It was the only victory for an American woman at the world meet, which was dominated by the suddenly emerging Chinese. Janet Evans began to show signs of vulnerability in 1995. After winning the usual three freestyle races at the national spring meet, she didn't win anything at the summer nationals, where her best finish was a second in the 400-meter. At her third Olympics in 1996, Evans didn't come close to medaling, and she announced her retirement from competitive swimming shortly afterward.