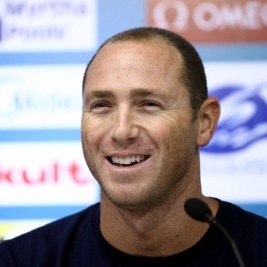 Businesses, Non-profit organizations, event planners and companies across the country have worked closely with our booking agents to hire Jason Lezak for a speaking engagements, guest appearances, product endorsements and corporate events. Many of those same clients have continued to turn to our speakers bureau as we can easily align Jason Lezak’s availability with their upcoming seminar, gala, annual conference, corporate function, and grand opening. Our close relationship with Jason Lezak’s booking agent and management team further enables us to provide inquiring clients with Jason Lezak’s speaking fee and appearance cost.

If your goal is to hire Jason Lezak to be your next keynote speaker or to be the next brand ambassador our celebrity speakers bureau can assist. If Jason Lezak’s booking fee is outside your companies budget or your unable to align with his appearance availability, our booking agents can provide you a list of talent that aligns with your event theme, budget and event date.

Olympic gold medalist, Jason Lezak was born November 12, 1975 and is an American international swimmer who won gold four times. He formerly swam for Irvine Novaquatics. He graduated from Irvine High School in 1994, and then from the University of California, Santa Barbara in 1999. He is a member of the Rose Bowl Aquatics swim club.

Lezak qualified for his fourth Olympics at the 2012 United States Olympic Trials in Omaha, Nebraska. His sixth-place finish in the Olympic Trial finals was good enough to reach the London Games as a member of the U.S. 4x100-meter freestyle relay team. At the Olympics in London, Jimmy Feigen, Matt Grevers, Ricky Berens and Lezak swam for the U.S. team in the preliminaries. Nathan Adrian, Michael Phelps, Cullen Jones and Ryan Lochte swam in the finals, and together all these competitors earned a silver medal for the team's second-place finish in the finals.