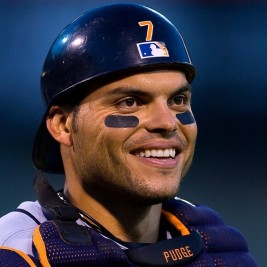 Businesses, Non-profit organizations, event planners and companies across the country have worked closely with our booking agents to hire Ivan Rodriguez for a speaking engagements, guest appearances, product endorsements and corporate events. Many of those same clients have continued to turn to our speakers bureau as we can easily align Ivan Rodriguez’s availability with their upcoming seminar, gala, annual conference, corporate function, and grand opening. Our close relationship with Ivan Rodriguez’s booking agent and management team further enables us to provide inquiring clients with Ivan Rodriguez’s speaking fee and appearance cost.

If your goal is to hire Ivan Rodriguez to be your next keynote speaker or to be the next brand ambassador our celebrity speakers bureau can assist. If Ivan Rodriguez’s booking fee is outside your companies budget or your unable to align with his appearance availability, our booking agents can provide you a list of talent that aligns with your event theme, budget and event date.

Ivan "Pudge" Rodriguez has become known as one of the greatest catchers to ever play in the Major League. Nicknamed "Pudge" because of his stock stature early in his career, Rodriguez made his Major League debut in 1991 and was the youngest player in the leage that year. Being a fan-favorite and community hero in both the cities in which he plays and his hometown in Puerto Rico has allowed Rodriguez to shine not only as a player but as a philanthropist. In 1993 Rodriguez founded the Ivan "Pudge" Rodriguez Foundation to benefit underprivileged families and children with cancer and other life threatening disease in both the Dallas-Fort Worth area and in Puerto Rico. Rodriguez is 14-time All-Star selection, 13-time Gold Glove award winner and a seven-time Silver Slugger winner. He was named to the All-Tournament Team in 2009 where he represented Puerto Rico in the World Baseball Classic. Rodriguez has also been honored for his generosity and community work. He was named the 1998 and 2001 True Value Robert Clemente Man of the Year and the 2001 Jim Sundberg Community achievement Award winner.