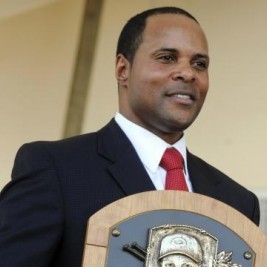 Businesses, Non-profit organizations, event planners and companies across the country have worked closely with our booking agents to hire Barry Larkin for a speaking engagements, guest appearances, product endorsements and corporate events. Many of those same clients have continued to turn to our speakers bureau as we can easily align Barry Larkin’s availability with their upcoming seminar, gala, annual conference, corporate function, and grand opening. Our close relationship with Barry Larkin’s booking agent and management team further enables us to provide inquiring clients with Barry Larkin’s speaking fee and appearance cost.

If your goal is to hire Barry Larkin to be your next keynote speaker or to be the next brand ambassador our celebrity speakers bureau can assist. If Barry Larkin’s booking fee is outside your companies budget or your unable to align with his appearance availability, our booking agents can provide you a list of talent that aligns with your event theme, budget and event date.

MLB Hall of Fame shortstop, Barry Larkin was born April 28, 1964 in Cincinnati, Ohio and is a retired Major League Baseball player. Larkin played shortstop for the Cincinnati Reds from 1986 to 2004 and was one of the pivotal players on the 1990 Reds' World Series championship team. Larkin was elected to the National Baseball Hall of Fame in January 2012 and will be inducted in July.

In his 19-year career with Cincinnati, Larkin batted for a .295 batting average, with 2340 hits, 198 home runs, 960 RBI, 1329 runs scored and 379 stolen bases. Baseball historian and expert Bill James has called Larkin one of the greatest shortstops of all time, ranking him #6 all time in his New Bill James Historical Baseball Abstract.

On July 20, 2008, the Cincinnati Reds Hall of Fame and Museum inducted Larkin, César Gerónimo, August "Garry" Herrmann, and Joey Jay. The induction was held at the Duke Energy Center in downtown Cincinnati.

The College Baseball Foundation announced on Tuesday, March 24, 2009, the names of the ten players and coaches comprising the 2009 National College Baseball Hall of Fame Induction Class, which included Barry Larkin.

In 2008, Larkin released a charity wine called "Barry Larkin's Merlot" with 100% of his proceeds supporting Champions Sports Foundation. Larkin built the Champions Sports Complex to harness the power of sport and use it to successfully develop the youth in America by targeting their social, emotional, and educational needs. The Foundation was established as the premier safe haven for the total development of young people through the authority of sport.