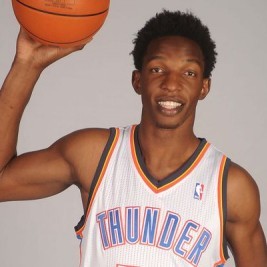 If your goal is to hire Hasheem Thabeet to be your next keynote speaker or to be the next brand ambassador our celebrity speakers bureau can assist. If Hasheem Thabeet’s booking fee is outside your companies budget or your unable to align with his appearance availability, our booking agents can provide you a list of talent that aligns with your event theme, budget and event date.

Hasheem Thabeet was born on February 16, 1987 in Dar es Salaam, Tanzania and is a college basketball player for the UConn Huskies in the USA. At 7 ft 3 in and 263 lb. Thabeet is the tallest player ever to play for the Huskies. He did not begin to play basketball until the age of 15, when he began to watch pickup games in Tanzania. Thabeet is projected to be a first round selection in the 2009 NBA Draft after deciding to forgo his final year of eligibility.

As a junior at UConn, Thabeet emerged on the national scene, averaging 13.6 points and 10.8 rebounds. He earned his first career triple-double against Providence College on January 31, 2009, with 15 points, 11 rebounds and 10 blocks. He finished with 152 blocks on the season, and he is known for the shots he prevents from ever being taken.

Thabeet surpassed the 1,000 point mark against Purdue on March 26, 2009. He was the 3rd UConn player that season to do so (Jerome Dyson and AJ Price were the others). Thabeet helped lead UConn to their first Final Four appearance since 2004.

Thabeet decided to forgo his senior season and declare for the 2009 NBA Draft on April 14th, 2009. He has the chance of being one of the top three picks in the NBA Draft. He is projected to go third which is currently held by the third pick, the Oklahoma City Thunder (As of June 18th), after Blake Griffin of Oklahoma, and Ricky Rubio of Spain.