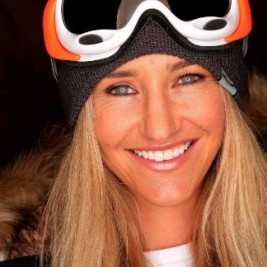 If your goal is to hire Gretchen Bleiler to be your next keynote speaker or to be the next brand ambassador our celebrity speakers bureau can assist. If Gretchen Bleiler’s booking fee is outside your companies budget or your unable to align with his appearance availability, our booking agents can provide you a list of talent that aligns with your event theme, budget and event date.

She sat out most of 2004 with a torn ACL, but came back to win at the X Games, the Gravity Games and the U.S. Open. Her X Games win in front of the hometown crowd at Aspen gave her victories in each of the two times she's competed there (she won in 2003, but then missed the competition in 2004 because of injury). Bleiler also made an impact on the international scene in the 2004-05 season, earning a gold and silver at a World Cup event in Bardonecchia, Italy, on the 2006 Olympic pipe.
The 2003 season wasn't bad for Bleiler either. During one stretch, she won eight consecutive events, including the X Games in Aspen. The steak gave her the overall Grand Prix title, but on Dec. 13, Bleiler tore her right ACL, effectively eliminating her 2004 season.

An innovator in the sport, Gretchen Bleiler is pushing snowboarding's limits this season by attempting a move she says no other woman has landed: the Michalchuk. She explains it as an off-axis spinning back flip off the backside wall. "I got it this fall so it's pretty exciting to be the only girl ever doing the trick," she says. Bleiler's already one of a select few women able to do a 900 (two and a half spins), and her signature move -- the crippler 540 (an inverted 540-degree spin) -- is consistently one of the top-scored tricks. Her goal for Torino is to land a back-to-back inverted combo.

Rather than competing as a member of the U.S. snowboarding team, Bleiler is part of an athlete-founded group called The Collection, which also includes 2002 Olympic gold medalists Ross Powers and Kelly Clark. The group travels together and has its own representation, and unlike other teams and organizations, the athletes make all the decisions.

When Bleiler was 10, she and her mother moved from Ohio to Aspen, and then to nearby Snowmass Village two years later. At Bleiler's private school, located three miles from the Aspen Mountain ski area, part of the physical education curriculum allowed students out early on Wednesdays so they could ski at the nearby resorts. After four years of such, Bleiler switched to snowboarding at 14, and soon thereafter learned how to ride in a halfpipe with the Aspen Valley Snowboard Team.

After graduating from Aspen High School in June 1999, Bleiler chose not to go to college so she could travel and train for the 2002 Games. She was named to the U.S. National Team in September 2000. Bleiler would like to attend college when she's done with snowboarding, but she doesn't anticipate retiring anytime soon.