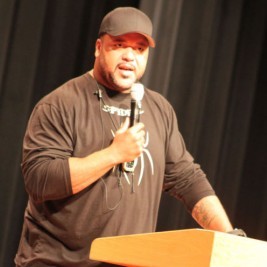 Businesses, Non-profit organizations, event planners and companies across the country have worked closely with our booking agents to hire Gilbert Brown for a speaking engagements, guest appearances, product endorsements and corporate events. Many of those same clients have continued to turn to our speakers bureau as we can easily align Gilbert Brown’s availability with their upcoming seminar, gala, annual conference, corporate function, and grand opening. Our close relationship with Gilbert Brown’s booking agent and management team further enables us to provide inquiring clients with Gilbert Brown’s speaking fee and appearance cost.

If your goal is to hire Gilbert Brown to be your next keynote speaker or to be the next brand ambassador our celebrity speakers bureau can assist. If Gilbert Brown’s booking fee is outside your companies budget or your unable to align with his appearance availability, our booking agents can provide you a list of talent that aligns with your event theme, budget and event date.

Gilbert Jesse Brown (born February 22, 1971) is a former American football player. A nose tackle who played for the Green Bay Packers of the National Football League (1993–99, 2001–03), Brown played 125 Packers games (103 starts) recording 292 tackles (186 solo) and seven sacks. Nicknamed "The Gravedigger," in honor of his celebratory dance following a thunderous tackle, Brown played in 15 Packers playoff games. He was a major contributor on strong defenses during the mid-1990s. His best season was 1996, when Green Bay won Super Bowl XXXI. He was also part of the Kansas team that won the 1992 Aloha Bowl, and was selected for the All-Academic Big Eight team in 1991.

Gilbert was featured in the Sports Illustrated special, "Where Are They Now?", featuring former professional athletes and what they are up to. Brown is currently a co-owner of the Milwaukee Mile, a racetrack that is often used for NASCAR races and at one time was the Packers' part-time home field. Gilbert even claims that he will occasionally fit his massive frame inside a race car and take a few laps. Gilbert, with the strong influence of his mother and family, felt that he wanted to give something back to the community, so he started his foundation which helps inner-city kids, and many other causes such as Breast Cancer and Make A Wish. In 2002, he combined his love for cars with his desire to give back when he organized a car show, Gilbert Brown and Friends, in Elkhart Lake, Wisconsin, which benefited the Make-a-Wish Foundation. Green Bay establishment Champions Sports Bar and Grill has a burger named in Brown's honor: the Gravedigger burger, which weighs in at 93 ounces (just over 5 3/4 lbs). The weight of the burger is a callback to Brown's jersey number, which was 93.