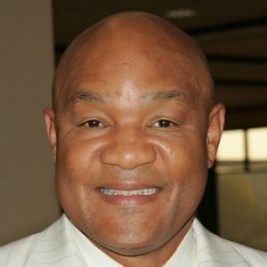 Businesses, Non-profit organizations, event planners and companies across the country have worked closely with our booking agents to hire George Foreman for a speaking engagements, guest appearances, product endorsements and corporate events. Many of those same clients have continued to turn to our speakers bureau as we can easily align George Foreman’s availability with their upcoming seminar, gala, annual conference, corporate function, and grand opening. Our close relationship with George Foreman’s booking agent and management team further enables us to provide inquiring clients with George Foreman’s speaking fee and appearance cost.

If your goal is to hire George Foreman to be your next keynote speaker or to be the next brand ambassador our celebrity speakers bureau can assist. If George Foreman’s booking fee is outside your companies budget or your unable to align with his appearance availability, our booking agents can provide you a list of talent that aligns with your event theme, budget and event date.

George Foreman was boxing's most feared fighter from 1973-1974. Undefeated in 40 straight fights, 37 by knockout, he was on a 24 consecutive knockout run when he faced Muhammad Ali on October 30, 1974 in defense of his world heavyweight title in Zaire, Africa. A product of a poor family, Foreman was in constant trouble with the law. He credits the Job Corp with turning his life around. Started boxing as an amateur and, in less than three years, captured a gold medal in the 1968 Olympic Games. Lost only 2 out of 24 amateur fights. Turned pro under the guidance of veteran trainer Dick Saddler. Foreman was a stablemate of former heavyweight king Charles "Sonny" Liston and Charlie Snips. Foreman idolized Liston and copied his ring style and mannerisms. Foreman used a piercing stare to intimated his opponents ala Liston. He was criticized for beating second rate opponents, yet had scored victories over credible fighters like George Chuvallo, Boone Kirkman and Gregorio Peralta. Destroyed undefeated Joe Frazier in two brutal rounds to capture the world title in 1973; Frazier was knocked down six times. Destroyed Jose "King" Roman in one round and Ken Norton in two rounds to retain his title. Foreman was knocked out by 3-1 underdog Muhammad Ali in 8 rounds. Foreman fought 5 men in one night in a 1975 exhibition. Won five straight knockouts on the comeback trail before being decked and decision-ed by Jimmy Young in Puerto Rico in 1977. Foreman claimed to have seen God in his dressing room following the defeat and announced he was going to become a preacher and retire from boxing. Preached for 10 years and blew up to 300 pounds. Decided to return to the ring to raise money for his church; experts laughed, but Foreman racked up 18 straight knockout victories. He was defeated in a title bid by Evander Holyfield but, a few years later, shocked the world by knocking out undefeated World Heavyweight Champion Michael Moorer (36-0) to become champion again at 45. Made a few successful defenses before losing his title by a controversial decision to Shannon Briggs. Foreman is known for his boxing career where he won an Olympic gold medal in 1968 and the heavyweight champion title in 1974. George also became a household name after his George Foreman Mean Lean Fat-Reducing Grilling Machines sold more than 100 million units. Foreman also spent over a decade promoting Meineke Car Care Centers and grew the business to over 1000 franchises. He has now successfully launched a line of environmentally safe cleaning products, exclusive line of personal care products, a prescription shoe for diabetics to prevent amputations, a restaurant franchise called UFood Grille, 10 books, and the list continues to build.