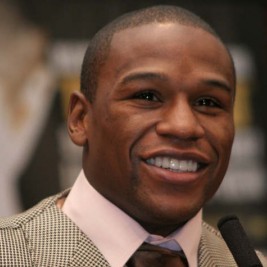 If your goal is to hire Floyd Mayweather to be your next keynote speaker or to be the next brand ambassador our celebrity speakers bureau can assist. If Floyd Mayweather’s booking fee is outside your companies budget or your unable to align with his appearance availability, our booking agents can provide you a list of talent that aligns with your event theme, budget and event date.

Floyd Mayweather, Jr. was born February 24, 1977 and is an American professional boxer. He is a five-division world champion, who has won eight world titles and the Lineal championship in three different weight classes. Mayweather is a two-time Ring Fighter of the Year (winning the award in 1998 and 2007); he also won the Boxing Writers Association of America (BWAA) Fighter of the Year award in 2007 and the Best Fighter ESPY Award in 2007, 2008, 2010 and 2012. He is undefeated as a professional boxer. Mayweather is the WBC welterweight champion, WBA (Super) light middleweight champion and recipient of the WBC diamond belt. He is also rated as the best pound-for-pound boxer in the world by many sporting news and boxing websites, including Sports Illustrated, ESPN, BoxRec, Fox Sports, and Yahoo! Sports. Mayweather topped the Forbes and Sports Illustrated lists of the 50 highest-paid athletes of 2012.

Since July 18, 2005, he has been rated by The Ring magazine as the number-one pound-for-pound boxer in the world. Floyd Mayweather Jr. has won four world boxing championships in four different weight classes, and he is the current IBF welterweight champion.

Mayweather had a successful amateur career, with a record of 84-6. He won national Golden Gloves championships in 1993 (at 106 lb), 1994 (at 112 lb), and 1996 (at 125 lb). He was given the nickname "Pretty Boy" by his amateur teammates because his face never had cuts or bruises after fights a result of the defensive techniques that his father (Floyd Mayweather Sr.) and uncle (Roger Mayweather) had taught him. In his orthodox defensive stance, Mayweather holds his right hand high (near his right temple), cradles his stomach with his left hand, and guards his chin with his left shoulder. From this stance, he blocks, slips, and deflects most of his opponents' punches, even when cornered, by twisting left and right to the rhythm of their punches.

At the 1996 Olympics in Atlanta, Mayweather won a bronze medal by reaching the semifinals of the featherweight (57 kg) division's 31-boxer tournament. In the opening round, Mayweather led 10-1 on points over Bakhtiyar Tileganov of Kazakhstan before he won by round 2 referee stoppage. In the second round, Mayweather outpointed Artur Gevorgyan of Armenia 16-3. In the quarterfinals, Mayweather survived a late rally by Lorenzo Aragon of Cuba to win 12-11. In his semifinal bout against the eventual silver medalist, Serafim Todorov of Bulgaria, Mayweather lost by a controversial decision that the U.S. team officially protested. Nearly everyone who saw the bout, including the referee, thought that Mayweather had won. However, the international judges, whom U.S. boxing coach Al Mitchell called "a bunch of mobsters," ruled the bout 10-9 for Todorov.

Mayweather fought his first professional bout on October 11, 1996 against fellow newcomer Roberto Apodaca. Mayweather won by knockout in round 2. Mayweather's trainer at the time was his uncle, Roger Mayweather, because Floyd Mayweather Sr. was still imprisoned after having been convicted of illegal drug trafficking in 1993. Mayweather Sr. took over as Mayweather Jr.'s trainer when he was released from prison (after Mayweather Jr.'s fourteenth fight a second round knockout of Sam Girard).[8] From 1996 to early 1998, Mayweather fought against relatively easy opponents and won most of the fights by knockout or TKO. The most notable of these fights was a unanimous decision victory over former IBO lightweight champion Tony Pep on June 14, 1998.

In 1998, Mayweather won his first world title, the WBC super featherweight (130 lb) championship, when the corner of Genaro Hernandez stopped the fight after round 8. From there, Mayweather defended his title with dominating performances against contenders such as Angel Manfredy and Carlos Gerena. Mayweather was named as The Ring magazine's fighter of the year for 1998.

Mayweather's biggest fight as a super featherweight was on January 20, 2001, against Diego Corrales. At the time, neither fighter had been defeated or knocked down. In the bout, Mayweather won every round and knocked down Corrales five times (three times in round 7 and twice in round 10). After the fifth knockdown, Corrales' cornermen climbed onto the apron and stopped the fight, thereby establishing Mayweather as one of the claimants to boxing's mythical pound-for-pound title.

In Mayweather's next bout, on May 26, 2001, future IBF champion Carlos 'Famoso' Hernandez "knocked down" Mayweather for the first time. Mayweather entered the bout with injured hands. When Mayweather hit Hernandez with a left hook in round 6, the pain caused Mayweather to drop his left hand to the canvas, and the referee called it a knockdown. Nonetheless, Mayweather won the fight by unanimous decision. In the award-winning documentary film More Than Famous, Hernandez's bout against Mayweather was prominently featured.

In 2002, Mayweather moved up to the lightweight (135 lb) division. Mayweather fought only four bouts at this weight, but they were all world championship fights.

Mayweather won two close bouts for the WBC and The Ring lightweight belts against Jose Luis Castillo. In their first bout, Castillo had success when he cut off the ring and used his strength to wear down Mayweather. Some analysts feel that Mayweather should have lost the fight, but he won by unanimous decision. In the less controversial rematch, Mayweather used his quick footwork and combinations to coast to another unanimous decision victory.

On April 19, 2003, Mayweather dominated the Dominican Victoriano Sosa and won by unanimous decision. Mayweather's next fight (on November 1, 2003) was in his hometown of Grand Rapids, Michigan. He fought against the promising South African knockout specialist Phillip Ndou, whose record was 31-1 with 30 KOs. Uncharacteristically, Mayweather was offensively oriented from the beginning of the fight. Round 5 was one of 2003's most action-packed. In the middle of the round, Mayweather landed a barrage of powerful punches. Ndou endured and threw wild punches that forced Mayweather into the ropes, but Mayweather demonstrated his rhythmic defensive technique and let Ndou wear himself out further. In round 6, Ndou wobbled and was pushed down. In round 7, a combination of three straight right hands knocked down Ndou and caused a TKO.

Mayweather then moved up to the super lightweight (140 lb) division. His first fight in this division was against southpaw DeMarcus Corley. Mayweather used his speed to win the early rounds. In the first minute of round 4, Corley landed a solid right hand and drove Mayweather into the ropes, but Mayweather recovered and fought back ferociously. After that round, Mayweather mostly controlled Corley. Mayweather knocked down Corley in rounds 8 and 10, but Corley was able to continue until the end. Mayweather won by unanimous decision. The fight was Mayweather's only one in 2004.

On January 22, 2005, Mayweather fought against Henry Bruseles of Puerto Rico in a WBC super lightweight title eliminator bout. Mayweather easily outclassed Bruseles throughout the first seven rounds. In round 8, Mayweather knocked down Bruseles twice, and the fight was stopped.