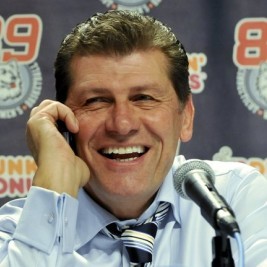 Businesses, Non-profit organizations, event planners and companies across the country have worked closely with our booking agents to hire Geno Auriemma for a speaking engagements, guest appearances, product endorsements and corporate events. Many of those same clients have continued to turn to our speakers bureau as we can easily align Geno Auriemma’s availability with their upcoming seminar, gala, annual conference, corporate function, and grand opening. Our close relationship with Geno Auriemma’s booking agent and management team further enables us to provide inquiring clients with Geno Auriemma’s speaking fee and appearance cost.

If your goal is to hire Geno Auriemma to be your next keynote speaker or to be the next brand ambassador our celebrity speakers bureau can assist. If Geno Auriemma’s booking fee is outside your companies budget or your unable to align with his appearance availability, our booking agents can provide you a list of talent that aligns with your event theme, budget and event date.

Geno Auriemma is one of the most renowned figures in the sport. He has led the Huskies to five national championships (1995, 2000, 2002, 2003, 2004), winning the national coach of the year award five times as well. He has coached some of the greatest players ever to play the college game, among them Rebecca Lobo, Jennifer Rizzotti, Kara Wolters, Nykesha Sales, Sue Bird, Swin Cash, and Diana Taurasi.

Auriemma, who grew up in Pennsylvania and graduated from West Chester University, arrived at the University of Connecticut in August of 1985 after being an assistant at Saint Joseph's University (1978-79) and the University of Virginia (1981-85). Prior to his arrival, UConn had only one winning season in the women's game. Since his arrival, he has posted 19 winning seasons, in the process setting the women's Big East home court attendance records for a game and a season.

Auriemma is also known for his quick wit and often savage tongue. His motto before the 2004 championship was, "We have Diana, and you don't." He frequently gets in media interchanges with his acknowledged chief rival, Pat Summitt of Tennessee; the two schools have one of the fiercest rivalries in college sports. He also apparently had a frosty relationship with UConn men's basketball coach Jim Calhoun, though the ice appeared to have melted when both won their national championships in 2004.

On ESPN, Auriemma is a frequent analyst of WNBA games. This puts him in the position of commenting on the play of his former stars.