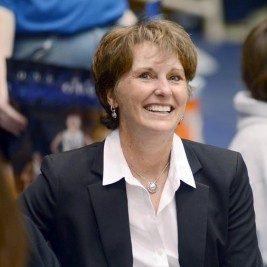 If your goal is to hire Gail Goestenkors to be your next keynote speaker or to be the next brand ambassador our celebrity speakers bureau can assist. If Gail Goestenkors’s booking fee is outside your companies budget or your unable to align with his appearance availability, our booking agents can provide you a list of talent that aligns with your event theme, budget and event date.

Gail Ann Goestenkors (born February 26, 1963), is an assistant coach for the Indiana Fever.  Previously, she was an assistant coach of the Los Angeles Sparks  and the women's basketball head coach for The University of Texas, having accepted the position on April 3, 2007, replacing the legendary Jody Conradt. Goestenkors resigned as the head coach at Texas on March 19, 2012, stating that her heart was telling her to "take a break" from basketball. Goestenkors was the Duke University women's basketball head coach from 1992–2007. During her tenure at Duke, she led the Blue Devils to 13 consecutive NCAA Tournament appearances, 10 consecutive appearances in at least the Sweet Sixteen (1997–2007), and an NCAA-record seven consecutive 30-win seasons from 2000-2007. Born in Waterford, Michigan, Goestenkors attended Saginaw Valley State University, where she played under future Purdue head coach Marsha Reall. After graduating in 1985, Goestenkors became a graduate assistant coach at Iowa State. After one season, she left to become an assistant coach at Purdue under Lin Dunn, where she remained until becoming head coach at Duke in 1992. Goestenkors accumulated an impressive record at Duke and is one of the most accomplished women's basketball coaches in the nation. She received recognition as the ACC Coach of the Year a record 7 times (1996, 1998, 1999, 2002, 2003, 2004, and 2007). In the 2001-02 season, Goestenkors led the Blue Devils to the first undefeated regular season in ACC women's basketball history — a feat she would repeat two other times during her tenure at Duke (2003, 2007). During her final ten seasons at Duke, Goestenkors led the Blue Devils to NCAA Tournament Sweet Sixteen appearances every year, seven Elite Eight appearances, four Final Four appearances, and two appearances in the NCAA Championship game. During her tenure, her teams won five ACC tournament championships and eight ACC regular season titles. Goestenkors holds the ACC record for fewest games required to achieve 300 wins (387 games). She's inducted into the Women's Basketball Hall of Fame as one of six members of the Class of 2015.