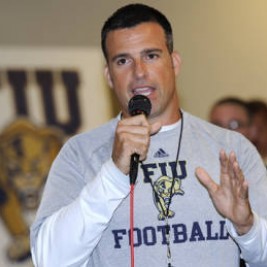 If your goal is to hire Mario Cristobal to be your next keynote speaker or to be the next brand ambassador our celebrity speakers bureau can assist. If Mario Cristobal’s booking fee is outside your companies budget or your unable to align with his appearance availability, our booking agents can provide you a list of talent that aligns with your event theme, budget and event date.

Mario Cristobal was born September 24, 1970 in Miami, Florida and is a college football head coach and former player who is the current offensive line coach for the University of Alabama football team. He is also the first Cuban-American Head Football coach.

Prior to joining Alabama, Mario was the head coach for FIU. On December 19, 2006, Cristobal was named the second head coach in FIU's history and will coach the team beginning in the 2007 season. Having worked as an assistant at Rutgers during their transformation to a competitive program in the Big East, Cristobal is now charged with leading a Golden Panther team that finished the 2006 season 0-12.

For his first months of work at FIU, Cristobal has implemented a spread offense, and expects FIU to achieve success "faster than what we did at Rutgers", a process which "took five years."

His first season, however, was anything but successful. FIU struggled for most of the season, losing their first eleven games. However, on December 1, the Golden Panthers finally broke a Football Bowl Subdivision leading 23-game losing skid with a 38-19 victory over North Texas.

His second season showed definite signs of improvement. After three back-to-back, out-of-conference losses to Kansas, Iowa and USF, the Golden Panthers under Cristobal pulled together an upset win against MAC opponents Toledo. The team used this momentum to build a three game winning streak, defeating Sun Belt Conference opponents North Texas and MTSU before it continued on to finish with a 5-7 record. The team was two wins away from a bowl game before falling out of contention in the 2008 Shula Bowl against in-state rivals FAU in a 57-50 OT loss, before finishing its season with an at-home victory over Western Kentucky.

Cristobal carries a reputation of being an excellent recruiter, setting up for his third season at FIU by putting together an impressive recruiting class of 23 student athletes, at least 20 of them from Florida. He wears a customary shirt and tie along with dress pants for each and every game to honor his idol, Joe Paterno. He was also named the fittest coach currently in the FBS according to an ESPN blog.